With a great nose and a striking appearance, the Bloodhound is a very special dog, valued for both its keen sense of smell and its stubbornness. Anyone who chooses this good-natured dog breed from Belgium has an extremely dignified-looking companion at their side who resolutely follows their owner. Due to its strong character, good training is essential so that dog and master or mistress become a really strong team. In this article, you will learn what makes a Bloodhound.

History of the Bloodhound

Also known as the “Hubertushund”, the bloodhound originally came from Belgium. The first breeders baptized the Bloodhound “Chien de St. Hubert”. For many years, when mating, attention was paid to a good sense of smell. In addition, parents were increasingly selected who shone with their almost tireless obedience and were gentle and friendly at the same time.

The ancestors of today’s bloodhounds are said to have faithfully helped humans hunt as early as the 2nd century. Belgian monks bred the hunting dogs with the characteristic appearance in the Saint-Hubert Monastery in the Ardennes for the nobility. He used these strong-willed dogs for hunting. Later, the Bloodhound was used by the police because of its excellent nose – it is said that it can follow the tracks of a criminal even days later. 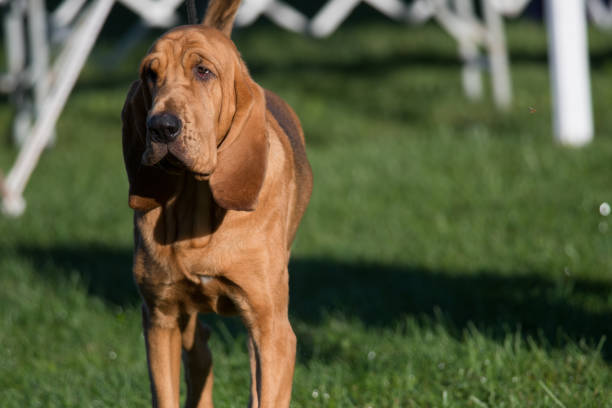 The Bloodhound exudes an incredible calm. He is gentle and always friendly. With the right upbringing, they make the perfect family dog. He plays tirelessly and is extremely social. Once he has picked up a scent, his single-minded streak shows. He has no pronounced barking behavior but seems relaxed in every situation.

The Bloodhound may come across as a stubborn dog to some, but with the right leadership, that makes them a particularly charming dog. Anyone who adopts a Bloodhound puppy should begin training immediately. Because the bloodhound puppies are extremely clever and learn very quickly. Wrong or insufficient training or socialization can have fatal consequences. Therefore, you should teach a young bloodhound early on where the limits are. This is not usually too difficult as this very old breed of dog likes to follow and wants to be part of the pack. Never punish a bloodhound without reason, because the big dogs are very sensitive.

Unfortunately, the Bloodhounds have gone out of fashion and there are only a few bloodhound breeders left in Germany. If you have decided that you want to adopt a dog of this breed, you should contact the Bloodhound breeders early enough and be prepared to wait a little longer if necessary. If you cannot find a suitable breeder on your own, you can check with the official national Bloodhound clubs. These exist in Germany as well as in France, England, the Netherlands, Belgium, and North America.

What Should I Look Out for When Buying a Bloodhound?

Take a good look at the breeder and his bloodhounds. A reputable breeder not only shows you the pedigree but also introduces you to the parents. Some also arrange contact with fully grown puppies of their breed. While this isn’t a must for spotting a good Bloodhound dealer, it can help you with your choice. In addition, the breeder should be sympathetic to you and respond and respond to all your questions in a friendly manner. It is also important that he treats his bloodhounds as family members. This way you can ensure that your bloodhound puppy already has a minimum of socialization.

Also ensure the completeness of the official papers, which include the following: 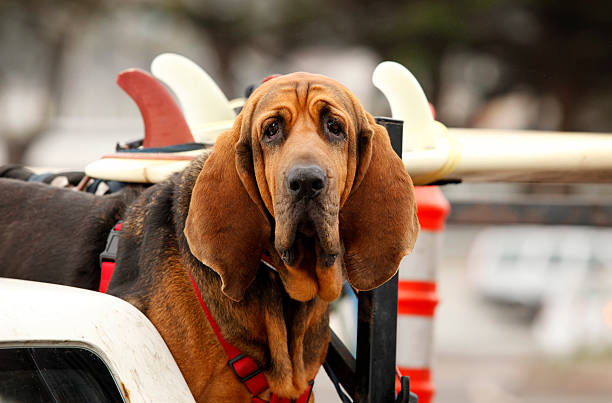 As previously mentioned, a Bloodhound is both gentle and easy-going and strong-willed and headstrong. Get help from a reputable dog training school. Here the bloodhound not only learns the basic commands but also gets along with dogs of different breeds. A Bloodhound needs loving but consistent training. He can sometimes react very sensitively and should always be able to understand why you praise or blame him. Bred for hunting, it is recommended that you take advantage of this and train your bloodhound to track. You can then incorporate this into regular game/training sessions.

How Do I Keep a Bloodhound?

Do you have a house with a garden? Wonderful, that’s how a bloodhound feels most comfortable. This large dog breed loves to be in nature and sniff out new smells. If you live in a city apartment and are dying to own a Bloodhound, it’s best to make sure they get plenty of exercises each day. If you have to work a lot, a suitable dog sitter can do it for you. A bloodhound should be exercised both physically and mentally every day. So vary the walks and regularly explore new parks and forests with your dog.