The Australian Cattle Dog is a small powerhouse whose original job was herding large herds of cattle. Nowadays he is a universal service or companion dog who prefers to live in the midst of a sports-loving family in the country.

History of the “Australian Cattle Dog”

As the name suggests, the Australian Cattle Dog is a breed of dog that can be traced back to Australia. There he had a fixed task and was mainly used to round up large herds of cattle. During his work, he was exposed to extreme physical stress and various weather conditions, which made him a resistant dog.

The fact that the Australian Cattle Dog is known in Australia under the middle name “Heeler” has to do with the driving technique, the heeling. The dog snaps the lower part of the legs so that the cows can move on. A similar technique is used by the mountain dogs in the so-called “sticking”.

The history of the Australian Cattle Dog began about 200 years ago. As long as the genome has not yet been decided, it is only possible to guess which breeds have been crossed over the years.

The Heeler probably goes back to these ancestors: 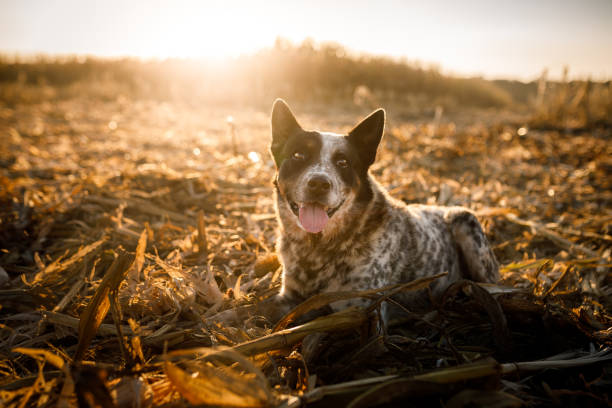 So the Australian Cattle Dog is an interesting mix of breeds.

In 1963 it was officially standardized in its homeland. However, at that time he was purely a working dog. The show line formed later. Recognition by the FCI followed in 1972.

The Australian Cattle Dog is a dog that combines many different character traits in a harmonious overall personality.

Courage: The cattle he oversees in his homeland are around 40 times heavier than the small herding dog. Completely unimpressed by this, he fearlessly plunges into battle.

Endurance: The Australian Cattle Dog works tirelessly to achieve its goals. That is why he is in his element as a farm, sport, or service dog. In any case, he needs an activity that can counteract his enthusiasm for movement.

Intelligence: The Australian Cattle Dog is docile and will learn a variety of tricks and skills. Therefore, he is also a dog that is open to good leadership and can be trained to be a great companion.

Distrust: In contact with strangers, the small cattle dog tends to be reserved. Until he can convince himself otherwise, he regards visitors as a risk.

Self-will: The small pedigree dog is strong-willed. He also used his assertiveness to work with the cattle. Today self-will is no longer necessary, if not even a hindrance. It is the owner’s responsibility to gain the upper hand over the dog’s stubbornness.

Loyalty: The Australian Cattle Dog forms a close bond with its owner. He feels most comfortable when this is firmly integrated into the daily routine.

Compatibility: If the Australian Cattle Dog has already come into contact with its own kind as a young animal, dog encounters are usually not a problem. However, encounters with other male dogs can suddenly be problematic from puberty onwards. It is therefore important that you continue to train your dog’s social behavior – for example in a dog school.

Purchase of an “Australian Cattle Dog”

If you are interested in buying, be prepared to wait several months. The breeding of Australian Cattle Dogs in Germany is rather poor. There are currently 18 breeders on the VDH website who will inform you online about upcoming litters and their work.

The price of around 1,000 euros is in a reasonable range for purebred dogs. Cheaper mixed breeds or Australian Cattle Dogs from animal welfare are a real rarity, so you should assume that you have to pay full price. 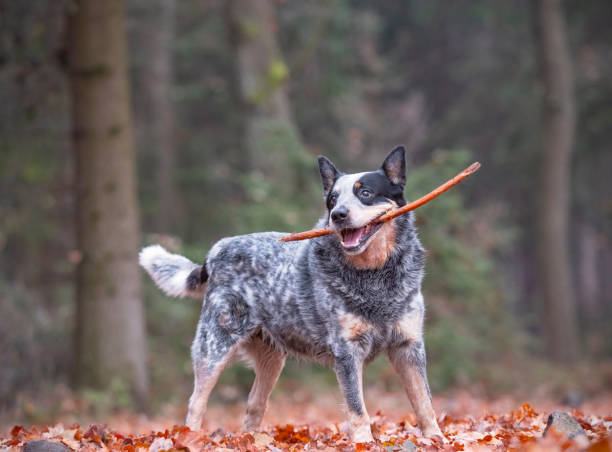 Private sellers occasionally offer their dogs on the Internet at very low prices, but the exact lineage of these animals is often unclear. Prices that are too low generally indicate torture breeding – so hands off!

The Australian Cattle Dog is a strong-willed dog that likes to take the lead without a consistent owner. However, provided he can grow on a foundation of assertiveness, protection, and trust, he readily recognizes the limitations of social interaction.

If the dog is trained early, gets to know various environmental stimuli, and can have contact with other dogs, it will grow into a well-balanced animal. Due to its tendency to be idiosyncratic, however, the Australian Cattle Dog can only be recommended to a limited extent for newcomers.