The Australian Shepherd, often affectionately referred to as “Aussie”, is a very interesting and still quite young breed of dog that now has many followers worldwide. The Aussie is a dream dog, but keeping it is not easy and it should only be kept by people who really want to and can keep it busy physically and mentally.

The history of the Australian Shepherd does not begin in Australia, as the name associates, but in North America and the world first heard about this dog breed around the middle of the 20th century. At that time, ASCA, the Australian Shepherd Club of America, was founded in Arizona and the first studbook was opened in 1957. The breed was then recognized by the FCI in 1996.

Where the name Australian Shepherd came from is a somewhat confusing story related to the Merino sheep. This breed of sheep probably comes from North Africa, was increasingly kept in the Basque Country in the 18th century, and came to Australia with emigrants, where it was called the Australian Sheep. And when Australian farmers later immigrated to the USA with their sheep and their working dogs, these dogs were just called Australian Shepherds for short. Of course, these dogs looked a bit different than today’s representatives of the breed and it is not known exactly which dog breeds played a dominant role in the emergence. What is certain is that among the ancestors of the Australian Shepherd are collies, kelpies, and bull terriers, perhaps also Dalmatians and possibly even a few wild dogs (dingoes). 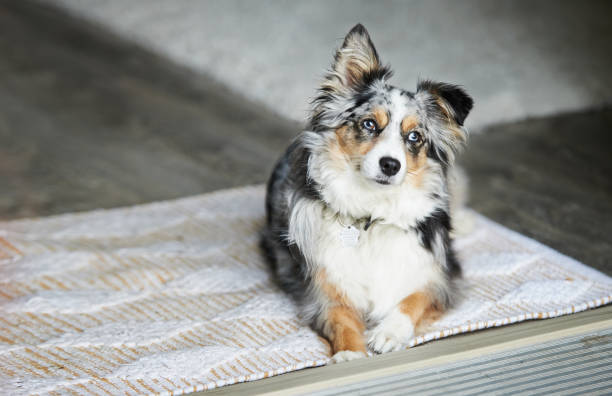 For the shepherds and cowboys in the western United States, it was not the appearance that mattered, only the work performance. They needed dogs that could keep the semi-wild sheep, but above all large herds of cattle and horses, in check, we’re tough, persistent, and very courageous, and that would guard and protect the often lonely farms and their inhabitants. The Australian Shepherds were also very popular with western riders and probably came to Europe at the end of the 20th century.

The Australian Shepherd is often compared to the Border Collie and sometimes confused with this breed of dog. There is also a certain visual resemblance between the two and both belong to the group of cattle and herding dogs. Nevertheless, there are also many differences between the two breeds and the Aussie is by no means a “Border Collie light” but a completely independent breed. They are generally a “tougher” dog than the collie, just as independent and willing to work, but not as specialized in herding sheep.

The Australian Shepherd is now primarily a loyal family dog. But he also wants and should be employed, because otherwise, he tends to look for his own tasks. Under certain circumstances, this can lead to an excessive protective instinct developing, which at best can be very annoying in everyday life and at worst even dangerous. So that it doesn’t come to that in the first place, here are a few tips for activities: Aussies, with the appropriate training, are very well suited as rescue dogs, companion dogs, and search dogs.

The Character & Nature of the Australian Shepherd

The Australian Shepherd is a very courageous, very robust, and persistent dog. He is agile, agile, and interested in everyone. As a former working dog, he has a strong herding and protective instinct. As a result, some breed representatives tend to become dominant if they are not given clear boundaries from the start. Nevertheless, the Shepherd does not tend to be aggressive by nature but is a calm and reserved dog with a high stimulus threshold. He is also quite intelligent and willing to learn from puppy age. The so-called “will to please” is very pronounced in this breed. An Aussie is easy to socialize with and then makes a great family dog ​​and the best playmate for children.

Teamwork is very important to him, which is why he prefers to be surrounded by a whole “pack” of people and is very reluctant to be left alone. He is not at all suitable as a kennel dog and would simply wither away in such an attitude. Life in a cramped city apartment is also not really desirable for him. He needs as much exercise, exercise, and activity as possible. 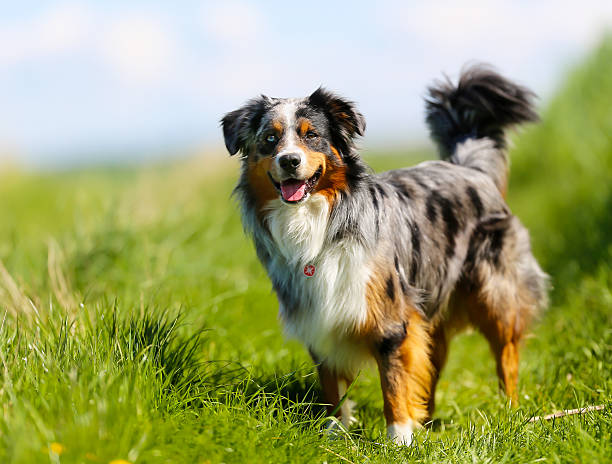 The Australian Shepherd only becomes a really great and happy family dog ​​if he is well trained. Due to his nature and his previous tasks, he has qualities that must be broken from him if living together in the family is to be harmonious. The herding instinct of the breed can, for example, lead to children and other family members being “herded” due to a lack of cattle, which in the worst case can lead to jumping or even calf or heel biting. The animal can’t do anything about it, it corresponds to what it had to do at work.

But the self-confident and independent behavior of the very clever Aussie can also develop in other unwelcome directions if the hierarchy in the family is not made clear to him right from the start and he learns what he is allowed to do and what not. It is therefore very important to attend a dog school with your Australian Shepherd, preferably as a puppy, and to integrate the whole family, including the children, into dog training. On the other hand, most Aussies love their family beyond measure and are the very best buddies, especially with children. Because they love to play and try new things into old age, they are easy to teach tricks and tricks.

However, the Aussie (or any other dog) should never be left alone with small children or babies. Even the best-behaved dog can suddenly react in an unusual way and become an unexpected danger. Incidentally, this applies in general and to all dog breeds equally.