Biting accidents are among the most frequently reported problems by owners of the breed. Guarding is in the breed’s genes. If the dog is not taught early on who is “calling the shots” in the pack, such problems can arise.

The Aussie needs to be exercised and also needs to be able to deal with periods of rest. This requires prudent upbringing and meaningful employment.

Don’t buy an Australian Shepherd just because you like the color of their coat and eyes. The Aussie is a workhorse!

The Australian Shepherd is a herding dog, so they should only be kept where they get enough exercise and activity. This breed is not suitable for beginners. Accustomed to working independently as a herding dog, he brings a good deal of self-confidence with him, which can only be guided in the right direction by an experienced dog owner. 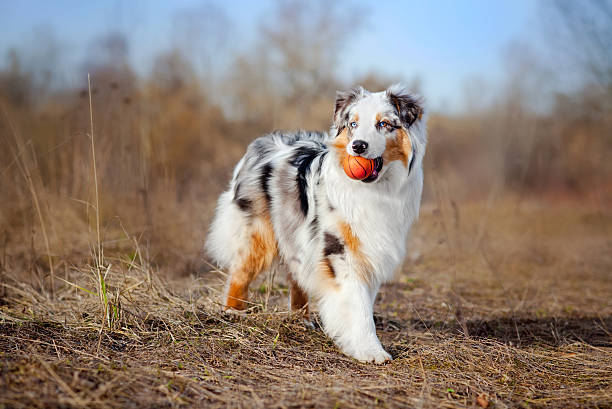 An Australian Shepherd needs more than the daily leisurely walk. Even a short bike ride is by no means enough to challenge these animals enough. The Australian Shepherd has an incredible urge to move and a corresponding amount of energy. They will enjoy agility, and obedience exercises are also good for keeping them entertained.

Many public institutions have recognized that the Aussies are vigilant and skillful, which is why they are often used as drug sniffer dogs or in emergency services.

To understand how the name came about, you have to go back two to three centuries in history: there were many different immigrant groups that spread across North America. They also brought their respective dogs into the country.

In most cases, these were guard or herding dogs. The Basque and Australian shepherds in particular had many dogs that crossed with each other or were crossed quite deliberately. This newly created breed was called the “little blue dog” because of its light blue color.

The Australian Shepherd is an attractive, medium-sized dog. Males have a height at the withers of 50.8 cm to 58.5 cm, females are slightly smaller: between 45.7 cm and 53.4 cm. The weight is not precisely specified; however, it should be true to size.

The coat of these dogs contributes a lot to the overall impression. It is medium long on the body with a very dense undercoat, while the head is very short and smooth.

The body hair is relatively rigid and very slightly wavy, giving good weather resistance. The colors in which the Aussie can occur are very interesting and extraordinarily varied (the individual coat colors are each very pure): four different basic colors: 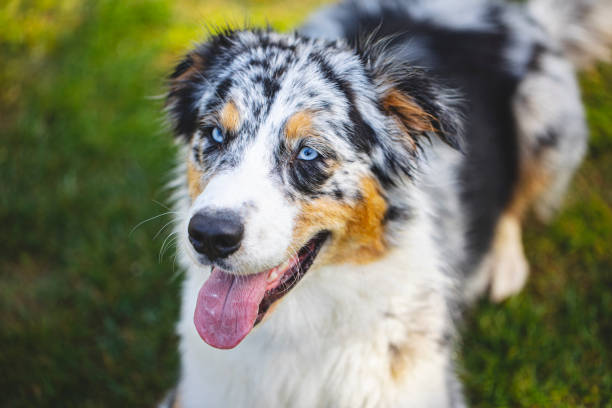 This results in 16 different coat colors:

In the United States, tail docking is common practice unless the dog was born with a congenital bobtail. These are called natural bobtails (NBT). Docking is prohibited in European countries.

However, the FCI itself specifies a maximum rod length of 10 cm (= 4 inches), which in any case corresponds to a stumpy rod. Due to the different regulations, different rod lengths apply in Germany, Austria, and Switzerland.

The Australian Shepherd’s eyes are medium-sized and almond-shaped. Allowed colors are blue and brown as well as amber. Combinations of these 3 colors are also permitted.

The Australian Shepherd has triangular tipped ears that are very slightly rounded at the top.