The character of the Beagle is characterized by cheerfulness, good nature, and temperament. He is very intelligent and never aggressive or even sharp. Unfortunately, he is also very headstrong and stubborn, which requires consistent leadership from puppyhood on. His innate drive to act independently as a pack and hunting dog allows him to follow any kind of weather whenever possible. Although they can show a keen appetite, they require little maintenance and care.

Characteristics of the Beagle

Many hunters appreciate the skill of the beagles when hunting hares or rabbits. They have a particularly fine sense of smell, are just as good at rummaging around as they are at sweating, and they very likely owe their name to their “belling” in the pack (see above).

In the meantime, however, the Beagle is mainly kept as a house and family dog, especially because of its cheerful and easy-care character. Unfortunately, because of its robustness, small size, and compatibility with each other, it is still being systematically bred and used as an experimental animal for medical research.

The Beagle is one of the most popular dog breeds in the world, the best known is certainly “Snoopy” from the American cartoon series “Peanuts”, which was created in the 1960s. 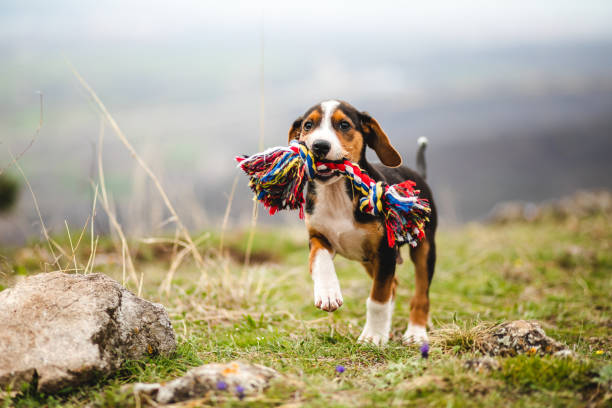 Beagles are excellent playmates, especially for children, as they never react badly to a clumsy touch and also join in any nonsense. He is actually happy everywhere, but some owners can sometimes get into trouble with the neighborhood because of their little family member’s “joy of singing”. Unfortunately, their adaptability to pack or even kennel life as well as their longevity has contributed to the fact that they are still highly valued as laboratory animals today.

The friendly face with the long, low-set ears reflects the nature of the dog. He always greets people and animals in a friendly manner. Nevertheless, they show a different face when an interesting track is picked up and has to be followed. Inevitably the hound and hound come through. Without successful training, the four-legged friend withdraws from the sphere of influence of its owner and seeks the distance.

In complete contrast to the home environment – the Beagle, being alone here is extremely uncomfortable. He needs the pack. He wants structure and rules, an experienced owner; continued a hierarchy within the family, and disciplined comments on his behavior. A lot of patience and measured tolerance allows the young beagle to mature into an adaptable and sovereign family companion.

One beagle exists as a pack dog and one as a laboratory beagle. The latter do not know what daylight feels like and frolicking about in a meadow is unknown to them. Maybe they’ll get to know “normal” dog life after they’ve served their time as test subjects for the pharmaceutical industry.

Why do dogs of FCI standard number 161 suffer such a fate? These dogs are used in the laboratory because they are considered hardy. Its name probably derives from the French word “beguile”, which means something like “open mouth”.

Their breed-typical traits include a tolerant nature and their recognized tolerance of other dogs. The breed’s very high bite inhibition also contributes to its laboratory fate.

Dogs that avoid such a path like to live in a large pack. Due to the restrictions in Germany regarding the size of hunting areas for hunting with pack dogs, the family has become pack replacements. The pack animals are lovable, bright, and balanced. Owners regularly rave about the almost limitless friendliness of their dogs when dealing with children.

Despite all the advance praise, it should not be forgotten that this breed was originally bred in England to track down hares and wild rabbits in driven hunts and show them to the hunter. This type of hunt requires the independent, intrepid, and extremely tough huntsman’s assistant. A good deal of stubbornness is part of it – even in the modern living environment.

Origin of the Beagle

As with so many other breeds, not everything is known about the exact history of the Beagle. The Romans already found hunting dogs in England, which are similar to today’s beagles and were mainly used by the locals to hunt rabbits.

It is also assumed that they were brought to Great Britain in 1066 during the Norman conquest. However, the name Beagle was only mentioned for the first time in 1475, the breed probably arose from crossings with other hounds such as the “Chien d’Artois”, which is also known as “Briquet”.

Others, however, regard the Beagle as a miniature version of the earlier “Southern Hound”, which in turn descended from the “Bleu de Gascogne” and was also a hare hunter. 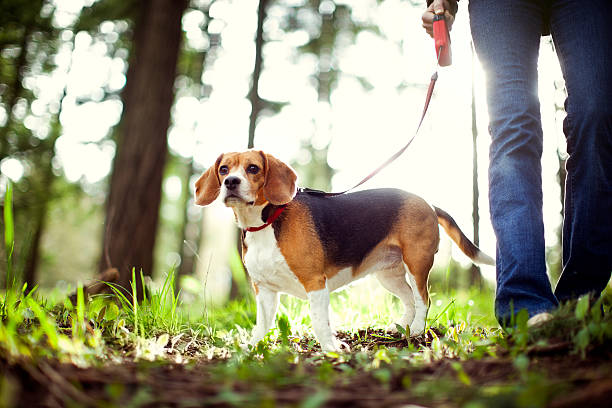 Either way, the beagles of that time were much smaller than today and, when they accompanied the English kings on the hunt from around the 16th century, they were carried in the rider’s jacket pocket.

Transports of up to 12 pairs of beagles in saddlebags have also been reported. Although this variety, known as the “pocket beagle”, no longer exists as an independent breed, since its size has steadily increased over the years, a “pocket beagle” still appears in one or the other litter from time to time.

The Beagles were represented at many English royal courts, from Henry VIII to his daughter Elizabeth I and William III. But especially King George IV appreciates them as pack dogs on his royal hunts. Beagle-like hounds also made their way to America during the colonial period, but it was only through imports towards the end of the 19th century that uniformity was created in the breed. The first beagle club was founded in Great Britain in 1895.

With a size between 33 and 40 centimeters, they are fully grown. Their weight is between 10 and 18 kilograms. However, these “ideal dimensions” only remain as long as there is a discipline in the allocation of feed. The Beagle is extremely resourceful when it comes to finding food. Those who do not eat greedily in a pack rarely grow old. If the dog’s diet and shape are right, the Beagle’s body appears almost square and strong.