The Pekingese, also known as the “Peking Palace Dog”, belongs to the FCI group 9 of the company and companion dogs and originally comes from China. His ideal weight should not be more than 5 kg for males and 5.5 kg for females. His coat has a lush, long and straight undercoat and a hard and dense top coat. It is also heavily feathered all around on the back, ears, legs, toes and tail.

The little Pekingese quickly polarizes because of its appearance. For some it is not a “real” dog, for others no other animal comes into the house. Hasty judgment is seldom good advice. The small bundle of fur, which is more commonly known as the Pekingese in everyday language, is also referred to as the Peking Palace Dog or Chinese Palace Dog.

The name Palace Dog has its origins in the Chinese Empire. At that time, the Pekingese, like the Lhasa Apso, was a companion of Chinese rulers. Only the imperial family is privileged to keep and breed the dog. Around two thousand years of history can be credibly documented, filled with reverence and careful breeding. 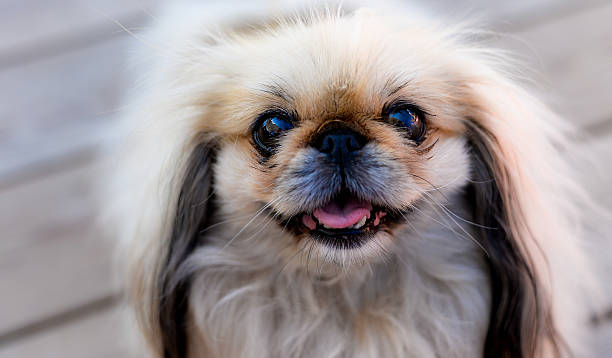 Many representations of Asian craftsmanship bear witness to this and are dedicated to the lion dog – so called at the time because of its lion-like appearance and the thick mane on its neck.

Not much is known about the exact origin of this breed. It is partly assumed that the Pekingese is a dwarf version of the very hairy dogs from Tibet. Elsewhere it is thought that, like the Pug, it may be an especially small version of a flat-faced mastiff species.

Possibly the Pekingese even arose from a cross between these two suspected sources. What is certain is that such dwarf dogs have been known in China since the Tang Dynasty in the 8th century. Porcelain and jade figurines testify to a centuries-old tradition that had its heyday of worship during the Manchu dynasty of 1644-1912.

Since superstition was very widespread at that time, the Pekingese was considered the embodiment of the “foo-dog” due to its appearance, which was able to drive away evil spirits. He received the name “lion dog” from the tradition that Buddha was accompanied by small dogs that could turn into lions in case of danger.

In the palace in Beijing alone, 4,000 eunuchs were engaged solely in breeding and raising Pekingese. It is even said that slave wives were forced to nurse these imperial puppies after their own daughters were slain. Ordinary mortals had to bow to them, and stealing a Pekingese was punishable by death. When an emperor died, his Pekingese were also sacrificed to protect him on the journey to the afterlife.

This impression is favored by the dense and coarse-looking upper coat. A thick undercoat gives the small four-legged friend effective protection against the cold. 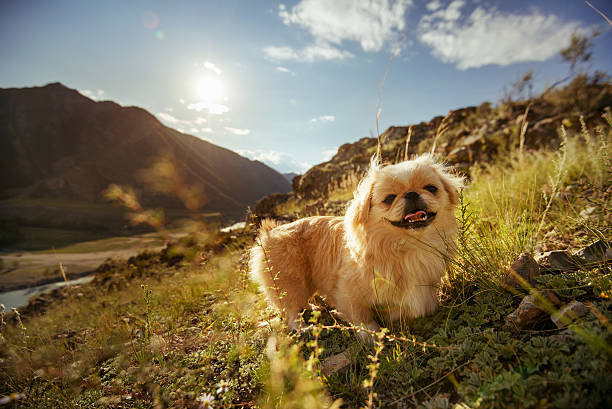 On the other hand, heat affects the animal badly – this fact should always be taken into account in warm summers. A great deal of importance is also attached to grooming. The long and straight hair needs to be brushed thoroughly and conscientiously every other day. Tangles are thus reserved for other dogs. The Pekingese has an impressive variety of colors.

With the exception of liver and albino colors, all colors are represented; plus multicolored and brindle variants. Black masks and the so-called glasses education are welcome. The shape of the extremely short muzzle looks like a smile. The dog’s face is flat and presents some potential for problems. The FCI standard clearly speaks out against any signs of breathing difficulties and recognizable eye problems.

This statement is absolutely necessary against the background of the sensitive eyes belonging to the brachycephalic breeds (brachycephalic = short-headed, round-headed) and the occurrence of shortness of breath.

This can ensure that the animal is spared suffering and that it receives the living space to which it is entitled. Unlike dogs, whose eyes lie behind the protruding and protective snout, the Pekingese’s large and exposed eyes are often exposed to mechanical stimuli without protection.

With his short nose, the little one is confronted with a runny nose and shortness of breath. The choice of the breeder is of particular importance! Responsible breeders offer a serious level of security – they know about diseases typical of the breed and comply with the indicated breeding hygiene measures for the benefit of the next generation of dogs.