Today’s family and companion dog with the number 347 of the FCI breed standard has its origins in Switzerland. The origin and career of the dog are well documented. Weisser Schäferhund or Weisser Schweizer Schäferhund are the German alternative names of the Berger Blanc Suisse.

As with all shepherd dogs, it all starts with their utility to shepherds as herding and driving dogs. In addition to the good herding qualities, the pure white coat is the desired feature – it makes the difference to four-legged attackers in a herd when visibility is poor.

Around the turn of the 19th century, there were regularly white offspring in German Shepherd litters. It is precisely this white that is at times a decisive disadvantage for the dog.

After 1930, white was classified as a false-color in Germany, among other places, on the assumption that there was a connection between the white coat and a series of genetic defects that occurred at the time. 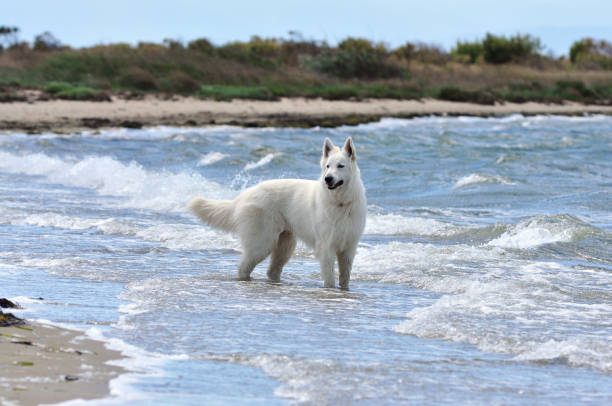 Thanks to US and Canadian breeds as well as undeterred breeders in these countries, an independent line is created. In Switzerland, the European construction of a new generation of attention magnets begins with immigrants of the race.

Externally, the white shepherd dog shows a characteristic appearance – it comes in two pure white coat varieties. On the one hand with short to medium-length stick hair and on the other hand with a long coat – both variants are well protected by the undercoat.

The distinctive erect ears, the black pigmentation of the nose, and the dark almond-shaped eyes give the appearance of nice accents. The fur of the medium-sized dog, which is 60 to 66 centimeters (females 55 to 61 centimeters) and weighs 30 to 40 kilograms (females 25 to 35 kilograms), is easy to care for.

For short hair, weekly brushing is sufficient, for long hair, this commitment several times a week is recommended. Even after intensive outdoor use, the fur is free of adhering dirt after a short time.

Significantly more individual features, on the other hand, characterize the character of the white shepherd dog.

It is not uncommon for dog owners of this breed to describe it, some of which are clearly contradictory. While some speak of their protégé’s self-confident and calm demeanor, others describe the animal’s existing shyness towards all strangers and everything new. Critical voices that characterize the dog as a nervous fear-biter should not go unmentioned. However, it may be questioned whether the animals described in this way actually come from responsible breeding.

The white shepherd dog in particular is enjoying increasing popularity. So it is urgently necessary to do everything for the sake of the dog, to trust a good breeder, and to give irresponsible dog dealers no chance!

Individual cases then remain individual cases and do not become the standard for a whole race. German Shepherds are rarely beginner dogs – the White German Shepherd is no exception. With good preparation, careful selection, and the necessary amount of unmistakably good-natured leadership, the challenge presented by this dog falls far short of the abundance of grateful experiences with him.

Even a certain nervous tendency of the animal can easily be brought under control by the role model behavior and sovereign action of the leader of the pack. If the ancestry and the early, reasonable, and individual upbringing are right, the intelligent animal will thank you with a pronounced tolerance and a high stimulus threshold. 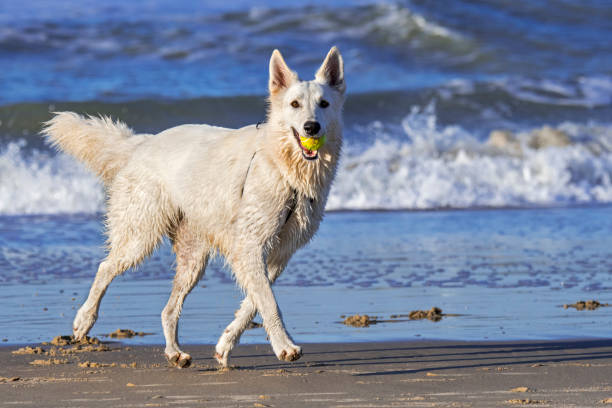 This also applies to the barking behavior of the dog, which is quite “talkative”. The white shepherd is relaxed, especially within his family pack and when dealing with children. It is infinitely important to him simply to belong. It is a loving form of attachment and a “shadowy existence” that the prospective owner of a White German Shepherd should be aware of. Periods of time without its people are wasted time for the animal.

It moves gently, sensitively, and attentively in the pack, in its family. Alert, the Berger Blanc Suisse quickly and willingly accepts the tasks assigned to him – gladly in connection with extensive exercise and sporting activities.

Working with the blind and rescue tasks are just as demanding for him as dog sport activities, running on a bicycle, on horseback, or alongside the jogger. The hunting instinct of the Berger Blanc Suisse, which varies in intensity, does not cause any problems for the attentive dog handler.