As soon as he utters this word, in his mind, a person begins to feel an indefinite fear of the animal, which was called such a formidable name. And this association was inspired for a reason because these dogs rightfully deserve a fighting title. But is our preconceived and stereotyped view of bull terriers really so unambiguous? Is it really worth it to be afraid of them and run from them wherever you look, as soon as you meet this beast somewhere nearby? In our article, we will analyze all the facts, pros, and cons of this breed in order to confirm or refute the myth of the formidable fighter and the capriciousness of the hunter, combined in bull terriers.

And although the appearance of the bull terrier is rather unpleasant, all this was conceived when breeding the breed, because he should not touch, but frightening. Particularly prominent against the background of a large athletic body are small eyes, around which there is often a bare skin of deep pink color, giving the dog a deadly look. The main feature of the bull terrier’s eyes is their interesting triangular shape. In addition, they are rather small in size and beveled towards the corners, planted at a considerable distance from each other. Eye color varies in shades of brown, but dark brown is most prized.

But the eyes aren’t the only interesting part of these dogs’ faces. Its very shape is quite unusual for dogs and looks like an egg. The nose, echoing the eyes, is slanted towards the tip. One gets the impression that someone broke the bridge of the nose of the bull terrier.

The mouth is large, dotted with many sharp fangs, which the dog will not fail to take advantage of. The lower jaw is considered the strongest, capable of even crushing bones during a bite or breaking the spine. The rest of the animal’s constitution is quite standard: straight triangular ears, wide chest, short thick neck, wide back, not long tail tapering to the tip, and four powerful muscular legs, studded with sharp claws. It seems that the creators have verified the formula with incredible scrupulousness and accuracy to create a real fighter in the squad of dogs. The coat of bull terriers is short, rather coarse, and harsh to the touch. Their main color is considered to be white, but slight staining in red and brown colors is possible. Sometimes in winter, they can grow a silky undercoat, which will soften their coat a little and make them more pleasant to the touch. The height of the animal varies in the range of 30-60 cm, and the weight – in the range of 18-30 kg.

The character is quite calm, at least in peaceful conditions. If we are talking about fighting or walking along the street without a muzzle, then the aggressive entity can make itself felt. The dog is easy to train. The main thing for the owner in this matter is to be clear, concise, and consistent, as they say, without extremes.

In addition, this breed of dog does not tolerate loneliness, always trying to be closer to the owner and his environment. They are very loyal animals who can even sacrifice their lives for the salvation of humans.

Characterizing the bull terrier, you can also highlight several qualities inherent in this breed of dogs, namely:

These dogs are very intelligent and have a lot of intelligence. But their intelligence can sometimes turn into rebelliousness. With the right training, you will be able to overcome the possible resistance of the dog.

Due to the fact that bull terriers are strong and physically developed animals, their shape must be constantly maintained, using physical training for this. This dog makes a great running companion and can be used with a wide variety of exercises, including jogging and cardio.

If you do not deal with the dog, then they can resort to two extremes: either find a way out of their energy on their own, getting into trouble, or neglect everything and everyone, get lazy and, as a result, fat.

In order not to become the culprit of such consequences, you need to carry out the daily exercise for your pet. They will also help you stay fit so your dog won’t be ashamed of you!

The positive characteristics of this breed include:

The negative characteristics of this breed include: 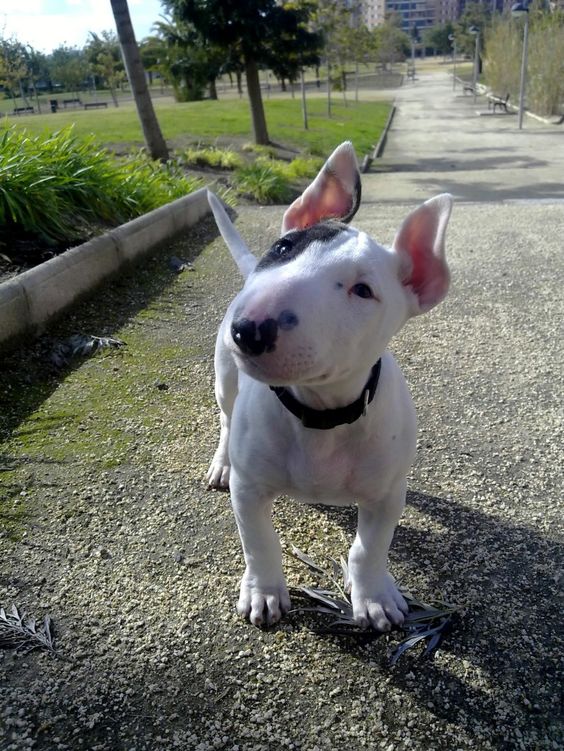 To summarize, we can say that bull terriers are not as scary as they are thought to be. And although in the past they participated in bloody competitions, today it is rather just an athletic and energetic dog. You can talk for a long time theoretically about what kind of bull terriers really are, but you just have to try to find a common language with him and understand everything. With proper education and training, Bull Terriers become real companions for humans. They are friendly, loyal, and just as much as other dog breeds can bring a lot of joyful moments to their breeder, as well as help to finally build time for sports and outdoor walks into their busy schedule. Therefore, adopting a bull terrier can be not only pleasant and cool but also useful. Therefore, you can safely debunk the stereotypes of bloodlust hanging over this breed of dogs. Bull Terriers prove that they get along well with people and are able to show affection and tenderness, and in addition, find a common language with children who would not make contact with just anyone.