Especially since the movie “One Hundred and One Dalmatians” this dog breed is very well known and popular. The white dogs with their funny black or brown spots also look great. But beyond that, they also have a wonderful character and are born family dogs.

Contents hide
1 History & Origin
2 Numbers, Data, Facts
2.1 Use
2.2 Classification, breed standard & breed standard
3 The Character & Essence of the Dalmatian
3.1 Dealing with Family & Children
3.2 In Dealing with Strangers
3.3 Dealing with other dogs and pets
3.4 Urge to move
3.5 The hunting instinct
4 Optics and Fur

There is much conjecture about the history of the Dalmatians, but relatively little evidence. The only thing that is clear is that the breed must be very old. Already in ancient Egypt and Babylonia, there were old drawings of dogs that looked amazingly like today’s Dalmatians. How and when they came to Europe is unknown. They also appeared under very different names, such as Turkish Hound, Bengal Hound, Tiger Hound, Petit Danois, and even Dalmatian. This name derives from Dalmatia, an area on the Croatian Adriatic where the dogs were first documented.

But the Dalmatians must also have existed in Germany around 1600, you can find them again and again in paintings from that time. At the end of the 19th century, the first animals of this breed were shown in dog shows and in 1920 the German Dalmatian Club was founded in Frankfurt/Main. 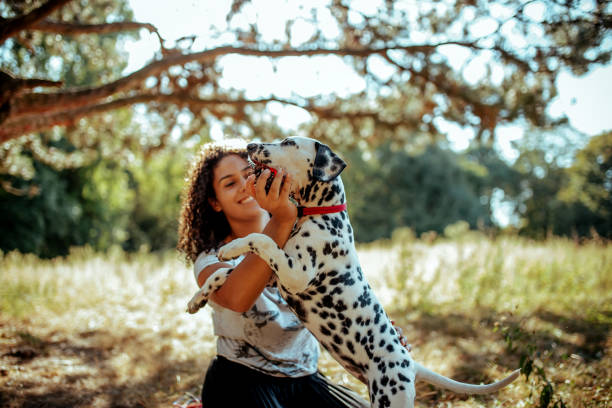 As far back as one can trace its development, the Dalmatian has always been a companion dog for riders and carriages. He followed them on their often dangerous paths and protected them from robbers, wild animals, and other hardships. He was almost always kept in groups. Today the Dalmatian is almost exclusively a loyal family dog ​​and companion dog. Some Dalmatians are also trained as therapy dogs or rescue dogs.

The Character & Essence of the Dalmatian

The Dalmatian is a pure scent hound and very active, so he definitely needs to be kept busy to feel truly happy. But he is also a well-balanced and friendly dog, loves to be cuddled, and is very devoted to his people. This dog has practically no aggression and its stimulus threshold is extremely high. Due to his past as a pack dog, he is also quite independent and not submissive. The intelligent dog is far more responsive to reward and loving affirmation than intimidation and punishment. But he must also know his place in the “human pack” exactly, otherwise, he sometimes tries to cross borders.

The Dalmatian is particularly suitable as a family dog ​​due to its friendly, easy-going nature. He also loves to play and is an active and resilient dog. The Dalmatian loves his people dearly, which means that he is very reluctant to be without them and finds it difficult to be alone at times. So this dog is not suitable for single working people, much less as a kennel dog. However, he is also not a pure house dog. He needs a lot of exercise and exercise and he enjoys everything that has to do with running. Whether long walks, jogging, cycling, or running alongside the horse, whether retrieving or dog sports, the active Dalmatian enjoys it. In the house, on the other hand, he is calm, balanced, and loves cozy sleeping and snuggling places.

In Dealing with Strangers

As friendly and open-minded as the Dalmatian is towards his own family, he is very reserved towards strangers. For example, he does not like to be touched and usually backs off when encountered. The Dalmatian is not a good guard dog, it barks very little and does not bark at strangers.

Dealing with other dogs and pets 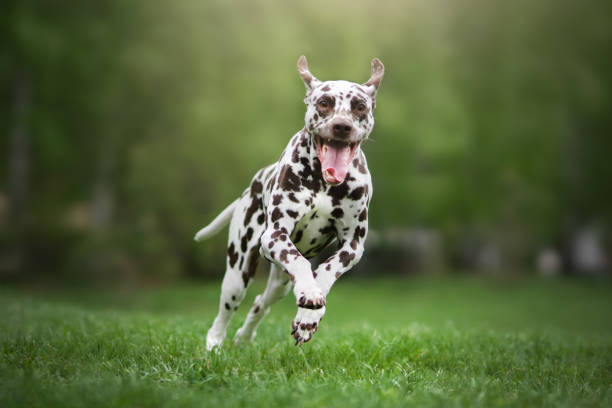 The well-behaved Dalmatian is also very friendly to cats, guinea pigs, birds, and other pets. Because he is not a hunting dog, he does not consider them prey, but only sniffs and eyes them. Encounters with other dogs are usually completely peaceful. The Dalmatian avoids any confrontation if given the opportunity to retreat.

A Dalmatian can easily run 10 to 15 kilometers at a stretch without getting tired and is therefore also best suited for active, sporty people. He likes best to run on a bike or alongside a horse. Most Dalmatians also enjoy swimming, and many enjoy agility, dog dancing, and hidden object games. Whatever action you offer him, he gratefully accepts. This breed definitely needs constant exercise. Constantly underwhelmed and bored Dalmatians can get very cranky and also cause a lot of damage around the house, especially when they are still in their “sloppy years”.

The hunting instinct is generally not a characteristic of the Dalmatian. He can therefore run freely without a leash in suitable places. Despite their great urge to move, most of them do not stray too far from their people and, with a little training, are also very easy to retrieve.

The Dalmatian is a medium-sized dog. On average, a male is between 55 and 66 cm tall at the shoulder and weighs between 22 and 32 kg. Females are slightly smaller. The physique of the Dalmatian is slim and yet athletic. The skull is narrow, the snout is long and the round, floppy ears are set high on the head. The tail is long, narrow, and hangs slightly curved. The short smooth coat is hard and dense. All Dalmatians are white and have black or tan spots that should be clearly demarcated. When they are born, the puppies are still completely white, the spots only appear after a few weeks and also change somewhat until the animals are adults.