Film fans experience them in 1961 as the London Dalmatian couple Pongo and Perdis. After thirty-five years, the story of the successful cartoon film is coming back to cinema screens worldwide with real actors and great success.

Representatives of the Dalmatian dog breed put themselves in the limelight in a whole series of public appearances. They accompany mail coaches and fire brigade teams over long distances. Meanwhile, they bark loudly to warn other road users of the approaching vehicles or protect the transported freight.

With the film’s success, the demand for spotted movie heroes increased, and less serious, profit-oriented breeders come into play. Today the Dalmatian is a healthy distance from a fashionable dog, which is a boon for the animals and their owners. The Dalmatians, who are often chosen as mascots by American fire departments, are physically and mentally very agile. 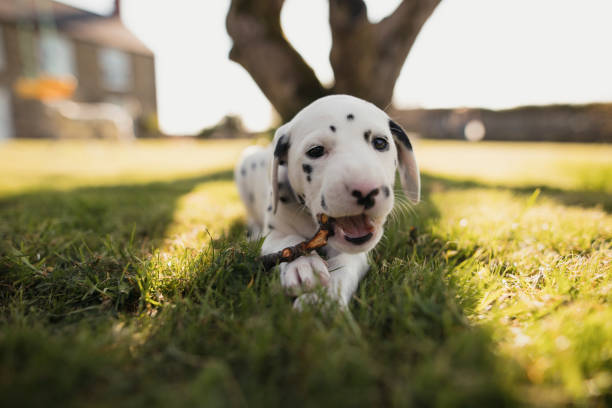 Movement is almost unlimited, running is in their blood. It can be two to four hours of exhaustion per day to do justice to the endurance runner who can run at considerable speed. The Dalmatian is the ideal companion dog for sporty people.

When something is going on, he feels comfortable. He accompanies his owners alongside the bike, on their paths in the great outdoors, or alongside the horse. The walking rhythm of the two different animals is nice to look at. The many facets of dog sport offer owners and dog ample opportunity for shared experiences.

So demanded, there is hardly any reason for the English pedigree dog to bring unrest into everyday family life. Sensitive and attentive, he is willing to be enthusiastic about any kind of game. In terms of character, the Dalmatian is a naturally easy-to-train, adaptable house dog, which is characterized by special love for children and intelligence. Although extroverted and lively, he only really barks when something special has happened.

Nevertheless, he is also suitable as a guard dog, as he is very courageous and not afraid to defend himself if necessary. Otherwise, he is not aggressive, has a good sense of who his master is, and is friendly towards the whole family, which makes him a loyal playmate for children. He is extremely persistent, at a moderate trot he can follow horses almost endlessly. His innate urge to move requires regular exercise.

He is used to acting independently and accepts tasks given to him well. Even if the medium-sized dog is mainly described as easy to train, it doesn’t work without consistent training. Especially the males get into a dominant role due to a lack of leadership. This trait is neither desired nor tolerated in relation to other dogs or within the family pack. It is the owner’s responsibility to make the ranking experienceable at an early stage and throughout.

Early contact with other conspecifics helps to prevent dominance behavior from developing in the first place. The Dalmatian eyed strangers cautiously at first. Free from the compulsion to constantly bark, he makes a good guardian. He absolutely wants to live in the company of people. This includes the older children being considerate around the dogs and being supervised by the adults.

Like many other dog breeds, the Dalmatian has a long and varied history. They are said to be among the oldest breeds of all. Most of this is unsupported by evidence, although black-spotted dogs can be seen on ancient Greek murals. In the FCI standard, Croatia is named as the origin for the standard number 153.

The stay at European aristocratic courts and the further development of the breed there, on the other hand, are widely accepted among cynologists. Especially in the 19th century, the English aristocrats and French nobles took care of the beauty. To this day, there are many legends surrounding the exact origin of the Dalmatians. As early as the 14th century, white dogs with dark spots, later known as Bracken, were known.

Because it came to the public’s attention as a status symbol of British nobility, many think its origins lie in England. However, some experts claim that he came from India and was then taken by gypsies to Eastern Europe, including Dalmatia. In some places, however, it is claimed that he actually comes from Egypt or Greece.

The breed was reported from Dalmatia very early on and got its name from there, which is why it was eventually recognized as a Yugoslav breed. Since it resembles the appearance of a pointer dog except for the spots, a relationship between the two can be assumed. However, he is also very similar to the small-eared Eastern European hounds with their close-fitting coat. 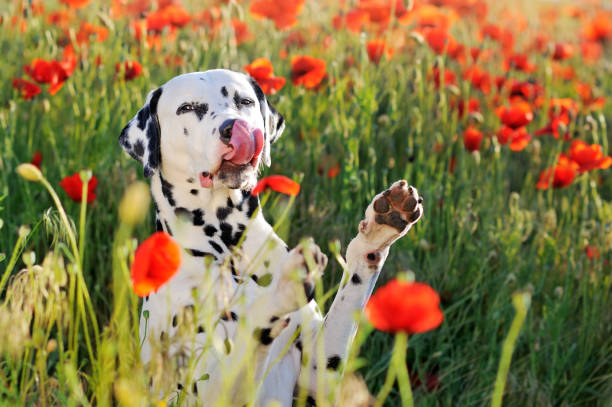 However, since these two possible ancestors developed mutually, the origin of the Dalmatian is still a matter of debate today, especially since its pedigree is very difficult to determine because it is not used either as a hunting or tracking dog.

Various experts think that it is either a pointing dog, hound, guard dog, or sheepdog, but in some places, it is also seen as a draft dog and even as a pied piper.

In any case, since the Middle Ages, he was known throughout Europe as a companion dog for horses. The English nobility in particular valued it as a companion for their carriages, where it was originally used to protect travelers from highway robbery, but was increasingly also used for representational purposes.

But even the simple people found more and more pleasure in the Dalmatians. They got their honorary name “Firehouse Dog” by clearing the way for the fire-fighting trains that were rushing at high speed in London and were of course still being pulled by horses.