The Entlebuch Mountain Dog guards the herds and homesteads of the mountain farmers. The four known mountain dog breeds from Switzerland have been standardized since the beginning of the 20th century. Greater Swiss Mountain Dog and Bernese Mountain Dog are the names of the two largest and heaviest breeds.

Does the Entlebuch Mountain Dog shed?

The coat of this breed is no different from other breeds. Changing the coat involves a little more work for you as a dog owner. Short hair is more difficult to get rid of than long dog hair. They dig into the carpet or couch more easily.

How much does an Entlebuch Mountain Dog cost from a breeder?

From reputable breeding, you have to reckon with a puppy price between 950 and 1500 euros.

Is the Entlebucher Sennenhund suitable for beginners?

In the dog forums, the majority opinion is – NO – the Entlebucher is not a dog for a beginner. This dog breed has a very strong will, so a layman would be overwhelmed very quickly. Training mistakes can quickly steer the dog in the wrong direction. Biting Entlebuch Mountain Dogs is a common topic on forums. 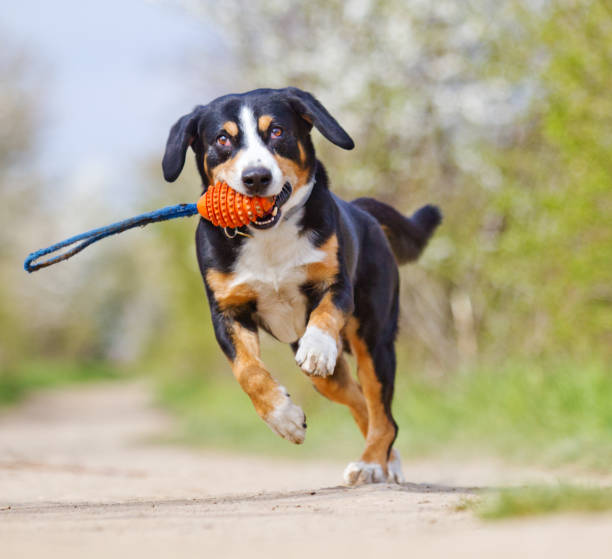 What occupation makes sense for an Entlebuch Mountain Dog?

Everything that challenges and keeps the dog busy. These can be search games, agility, or obedience. Training to become a tracking dog or material

They are physically fully grown at about 12 months. Ectopic ureters (congenital urinary incontinence) in Entlebucher Information about this disease can be found here

When is the first heat at the Entlebucher?

The first heat can be expected from the 7th month of life, sometimes even later. The duration of the heat is about 21 days, whereby the bitch is only receptive on a few days (5-6).

The Appenzeller Sennenhund is significantly smaller. The fourth in the group, the Entlebucher Sennenhund, still weighs 22 to 30 kilograms. The shoulder height of the males is between 44 and 52 centimeters, and the bitches remain slightly lower.

The Entlebuch Valley is located in Central Switzerland between Lucerne and Bern. The area is now a UNESCO biosphere reserve and home to the Entlebuch mountain dog. The pedigree dogs listed by the FCI under the standard number 47 in Section 3 live here. The first descriptions date from 1889 and from 1927 the pure breeding of the compact Swiss working dogs began.

With their help, dairy farmers drive their cattle around the Emmental and Entlebuch valley. It is the time when the Swiss do not consider it important to differentiate between the four races mentioned. The eagerness to work counts and the reliability of the helpers.

Farmers refer to their dogs as four-eyed because of two brown-red spots just above the eyes. The name Bläss is also common – the Swiss name for the mountain dogs due to the pronounced white facial line, the blaze.

Like all Swiss Mountain Dogs, the Entlebucher Mountain Dog’s short, thick coat is three-colored. The black basic color provides a striking contrast to white and yellow-brownish to rust-red markings. Equally striking are the long back, broad skull, and triangular ears that droop with rounded tips. A dense undercoat protects the dog’s body under the shiny and close-fitting top coat. The fur is easy to care for. During the hair change, the comb removes dead hair before it becomes a nuisance in the apartment. In the time in between, vigorous brushing is sufficient.

The stock numbers of the breed are quite modest worldwide. The attractive four-legged friends mostly enrich Swiss, Austrian, and German families. Those who live with the Swiss are faced with a bright, friendly, and self-confident guardian. A loyal friend for children and adults, who eyes strangers with suspicion without appearing aggressive.

The Entlebucher Sennenhund shows hardly any dominant behavior, regardless of this, he demands boundaries that are clearly shown to him. Ideally, socialization begins early. The dog owner introduces the four-legged friend to all situations that will influence his later life. The animal’s ability to learn and its tendency to please are beneficial to its upbringing. 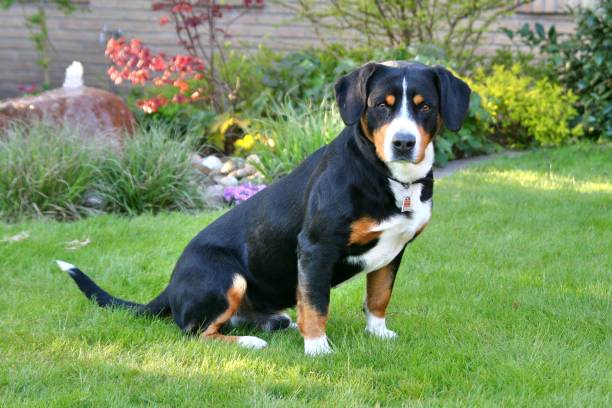 However, the inexperienced dog owner is allowed to introspect and critically question whether he can give the spirited powerhouse enough direction. The Entlebucher needs the leadership quality as well as the affection and encouragement of his people. Living together with the adaptable Swiss is also possible in the city. Active time together is important. The Entlebucher is a nimble representative of the breed with a high urge to move.

Dog owners of this breed report problems with their Entlebuchers in various forums. Often the topic is “dog bites often”. For the fearless Entlebucher Sennenhund as a working dog, the bell was a means to an end. His energetic word drove the cattle on. If this wasn’t enough to move stubborn hoofed animals, a well-measured bite on the leg of the large animal would do the trick.

You see, behavior is partly in the breed’s genes. Unfortunately, with the wrong upbringing, this quickly goes in an undesirable direction. Visiting a good dog school is therefore recommended. This breed has a very strong will and enormous willingness to work.