Fila Brasileiro – The incorruptible friend and excellent watchdog only belong in experienced hands. Once there, he can develop into a loving, gentle family dog. He is the national dog of Brazil and is known for endurance, strength, and courage.

The forerunner of today’s Fila Brasileiros was primarily a watchdog and guard dog that guarded the huge herds of cattle and cattle as well as the fazendas (Portuguese for the estate) from thieves and robbers. It was also used for hunting at that time.

When the slave trade came to Brazil with the Portuguese and Spaniards, the Portuguese bloodhound Sabujo was crossed with other European breeds. It is considered probable that both Bloodhound, Mastiff, and Bulldog were crossed.

Thus, in the 19th century, a dog emerged that was athletic, alert, and equipped with an excellent nose. Because of these characteristics, the dog was used for guarding plantations, accompanied the slave marches of the time, and was able to catch fleeing slaves and bring them back unharmed. Today’s Fila Brasileiro is an excellent watchdog and tracker and is now mostly kept as a family dog. The Fila Brasileiro should not be trained to be a protection service or protection dog, as it already has these qualities by nature.

An incorruptible nature and a courageous and fearless character characterize Fila Brasileiro. He loves his family and his pack more than anything and he will make it his duty to protect his pack from all dangers – especially on home territory.

Fila is forgiving and tolerant towards his family. He adapts to his family and always seeks to be close to his pack. If he grows up with small children from puppyhood, there is a high probability that living together will work out well. The prerequisite for this is mutual respect and children who accept that the dog is not a toy and is not available around the clock. At children’s birthday parties, it may well be appropriate not to expose the dog to the hustle and bustle of the (unfamiliar) children.

If fully grown Filas are brought together with children, it can sometimes take patience and a period of several days before he understands the expansion of the pack.

The Fila Brasiliero is extremely suspicious of strangers. He doesn’t seek recognition. The Fila Brasileiro also tends not to be petted by strangers. Anyone who knows about this and takes it for granted often saves their dog, the stranger, and themselves a lot of stress. “May I stroke your dog?” Fila usually answers by himself, in which he looks very suspiciously at people who come too close to his pack. Often the question of stroking does not even arise.

And even within your own four walls, the Fila doesn’t thrive on strangers. Strangers are sometimes caught and taken away. Going to the toilet can be reason enough. However, he seems calm and “just doing his job” and not aggressive.

Assuming good training and early socialization, the Fila can become a polite and trendy dog ​​towards other dogs. Compared to smaller dogs, it often seems that he classifies them as harmless and gets involved with you. 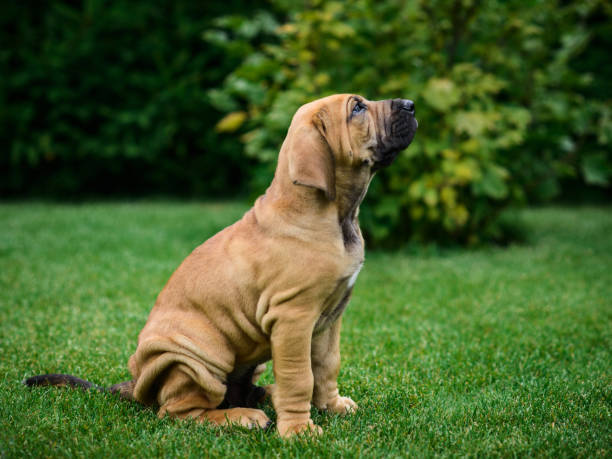 It can be different on your own property. Here one should at least be prepared for the fact that the Fila sometimes does not like it at all when the territory is entered by conspecifics.

Anyone who already owns a Fila and is considering getting a second dog should give the Fila a few days to get used to the new situation.

Here, too, different behaviors can be observed. Puppies that grow up with cats, birds, and rodents do not necessarily have to be just as responsive to other animals as they grow up, but it can definitely work. There is no general statement here.

Long walks, jogging, and cycling are good exercises for long-distance runners. In order to enable your dog to exercise as much as possible according to its abilities, tracking work is particularly recommended. Sports such as agility are less suitable. Due to his heavy physique, on the one hand, the risk of sustaining an injury increases and, on the other hand, he will find the tasks set there boring and not in accordance with his nature. It develops at a breathtaking speed over short distances.