The FCI Standard No. 6 seems extremely demanding and sets the bar very high for the Gordon Setter. His outward appearance is equated to that of a thoroughbred. With its harmonious proportions, the dog corresponds to a powerful hunting horse.  Elegant composure is expected of him as well as a courageous, open and friendly-balanced demeanor.

The breeding line desired in this form comes from Scotland and has been called Gordon Setter since 1924, after a transitional period as “Black-and-Tan-Setter”. The previously three-colored and long coat variants are falling behind in favor of a two-color deep black with a warm chestnut red. Branding in the form of two light markings above the eyes is desirable.

The fur today is short to moderately long and smooth. Fringes on the stomach, more or less pronounced, are part of the breed-typical appearance of the hunting dog. 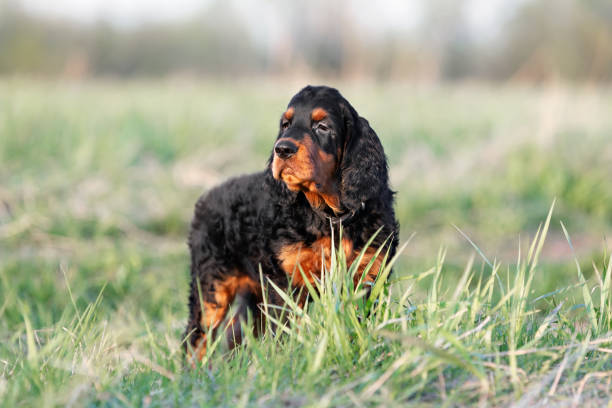 With appropriate regularity, the grooming effort is less than expected for the medium-length coat. Brushing and combing every third day may be a clue. Dead fur can be touched up with a knife brush as needed. It is important to check the ears for dirt – the lop ears prevent adequate ventilation. And every dog ​​picks up ticks during its activity in the woods and fields – here the search after the outdoor use reduces the risk of parasite bites for the four-legged friend.

The representatives of the breed have their heyday in the north of England and Scotland – a dog of well-off landowners. An intelligent and capable gundog with a breeding focus on its hunting acumen. This includes tracking down game birds such as pheasants and partridges and pointing them out to the hunter. If Gordon Setter also works together with his own kind, the seconding comes into play.

This innate disposition allows the dog to remain in the typical signal position when another four-legged hunting helper has picked up the game scent. His ability is a not inconsiderable advantage for the hunter when hunting small game. The Gordon Setter has been native to Germany for over a hundred years and is particularly popular in southern Germany. The orientation of pointer breeding on the continent is clearly different from the English line.

Only years after the end of the Second World War did breeding start again, resulting in a comparatively rare distribution of the breed. Thoroughbreds are generally more suitable for experienced riders. It is no different from the Gordon Setter due to its history of origin and the associated task.

The pronounced hunting instinct and its strong need for exercise make demands on its owner and require experience with dogs. The medium-sized dog (males up to 66 centimeters at the withers, females about 4 centimeters smaller) loves work.

Its body, which can weigh up to a good 29 kilograms (females weigh around 4 kilograms less) is powerful and persistent. An active person who knows how to lead in a structured and understandable way suits the agility of the Gordon Setter. Challenging hikes long walk on varied terrain as well as cycling and jogging excursions satisfy a dog’s longing.

The passion for hunting, on the other hand, is only given a direction that is acceptable to both sides with puppy school, basic training, and ongoing training. It cannot replace classic fieldwork – here, too, the responsible person is required to offer an adequate replacement. 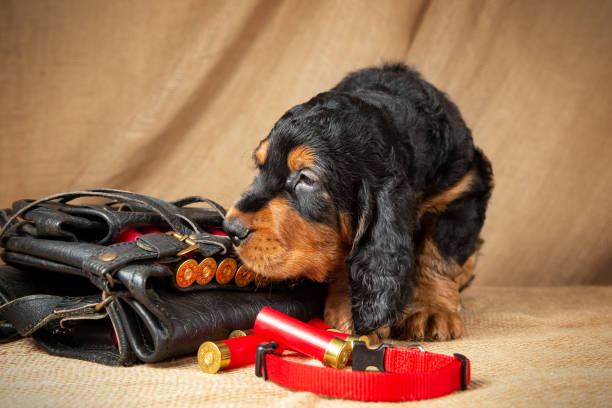 Be it in the form of tracking work, by challenging the dog with the dummy, or with offers from good dog schools that are tailored to the requirements of the hunting dog. Respected in such a way in its nature and its needs, the Gordon Setter thanks it with a very people-oriented and willing attitude.

Challenged outside in a manner appropriate to the species and kept busy with a lot of exercises, the character dog is calm indoors and rarely barks.

As with the hunters, the noble hunting dog is equally popular with the children of his family. Duke Alexander of Richmond bred the first Gordon Setters in 1820. The Duke was a dog lover and devoted himself to breeding hunting dogs at Fochabers Castle in Banffshire. He crossed black setters with bloodhounds and collies and pointers are also said to have been crossed with them.