One of the characteristics of these dogs is the “will to please”. This is particularly recognizable by the pronounced willingness to learn, which leads to the use of the breed in various fields of work.

Originally bred to hunt waterfowl, today’s Golden Retriever is an extremely versatile dog. Wherever there is a wet and cool climate, he is very suitable for work but also as a play dog ​​due to his ancestors. It is increasingly being used as a guide dog for the blind. His loyalty and gentle nature make him a perfect family dog, especially since he is very patient with children. His characteristics mean that he is constantly on the winner’s podium in obedience competitions in the USA, and he is just as successful at exhibitions.

However, he needs plenty of exercises to counteract his predisposition to being overweight. Due to his joy of movement and the desire to please his master, he is always willing to accompany a member of his “family” on walks. Wind and weather don’t bother him and of course, he’s always ready to jump into the water.

Golden Retrievers are therefore used with great success as guide dogs, rescue dogs, or tracker dogs in addition to their retrieval activities when hunting small game. They are characterized by a comparatively high level of intelligence and relatively easy leadership. 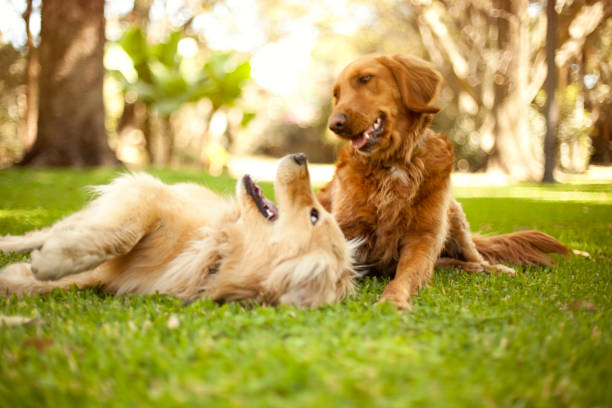 Most dogs of this breed are now kept as family dogs. Because they are not usually aggressive, they enchant “their” families with their friendly nature. Therefore, these dogs are not excluded, but their living space should be in the middle of their relatives.

Originally, the Golden Retriever was bred to hunt waterfowl. Its uses have changed over time and today’s Golden Retriever is an extremely versatile dog. Since retrieving rather than hunting is in his genes, he does not tend to poach or stray.

His will to obedience often brings him places on the winner’s podium in obedience competitions.

So that the predisposition to obesity does not come through in this dog breed, plenty of exercises should be planned. The Golden will happily take part in any walk-in wind and weather and will be happy to take a trip into the cool water.

The athletic retriever is known to be gentle and people-friendly. He is “addicted” to affection and is friendly even to strangers. This breed of dog is active and always up for a long walk or games. So far the expectations when reading the breed descriptions. Remember: every dog ​​is different. Whether the Golden Retriever will actually behave like this is unpredictable.

There are hyper dogs that are bursting with energy and need a lot of work. Other members of the same race love to be lazy – just like us humans do. There are nervous dogs and balanced ones. The breeder lays the foundation when selecting the parents and in the first few weeks of the puppies’ lives. Later it is up to the owner how he treats the dog.

There are also biting specimens among this breed – which is almost always due to poor posture and upbringing.

Reports like here, here, or here show that the Golden Retriever is “just a dog” and should never be left unsupervised with small children. This applies to every breed of dog! The trigger is often the need to “pet the dog”. The dog may interpret this action as a threat – with unfortunately sometimes very bad consequences for humans

History of the Golden Retriever

The Golden Retriever originated from one of the many hunting dog breeds in the mid-19th century. Although the exact origin is still a matter of debate, it is clear that this breed owes much to the efforts of Sir Dudley Marjoriebanks, also known as Lord Tweedmouth.

Originally, the Golden Retriever was primarily used as a hunting dog for work after the shot. Due to their great love of water, they are particularly suitable for retrieving game birds from water bodies. In the second half of the 19th century, many hunting dog breeds emerged, the Golden being one of them. Sir Dudley Marjoriebanks has done a great deal for the breed. His very carefully kept studbooks provide information about the history of the origin of the Golden Retriever. 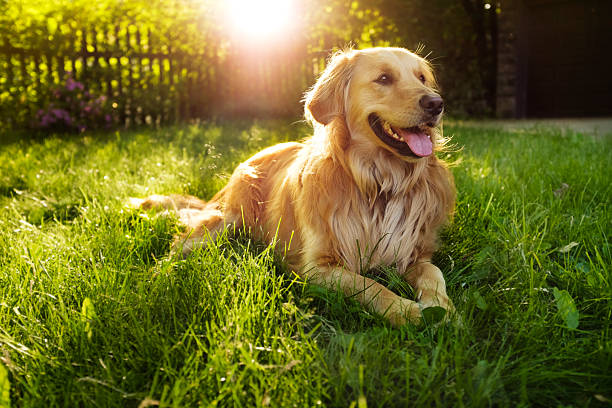 His stud books give a lot of information about the exact history of the origin of the breed. Although black, long-haired Labradors were fashionable at the time, the Newfoundland and Labrador Water Dogs have always had yellow recessive genes, which later emerged in the Yellow Labrador, but also in the Chessie and, of course, the Golden Retriever.

In order to breed a good water retriever, he acquired a Flat-Coated Retriever which, due to his weakness for yellow colors, he crossed with now-extinct water spaniel bitches that had a light, liver-colored coat. One or two Labradors and a red setter, possibly also a bloodhound and other Wavy-Coated Retrievers were then crossed in as part of systematic line breeding.

The result was a dog with a natural retrieval instinct and a keen sense of smell and sense of smell. This breed was first called the Golden Flat-Coated Retriever. First exhibited in 1908, they were recognized by the UKC as a separate breed, Golden or Yellow Retriever, in 1913. In 1920 they received their name, which is still used today

According to most dog researchers, the fact that they were originally also issued as “Russian Retriever” or “Russian Retriever and Tracker” is due to the legend of a Russian shepherd dog, which, allegedly bought from a traveling circus, is said to have contributed to the breeding of this breed.

However, there is no mention of this in Lord Tweedmouth’s records. Although, of course, other than Lord Tweedmouth also bred golden retrievers and there may have been such foreign crossbreeding, the cynologists believe that it makes little sense to crossbreed shepherd dogs with hunting dogs.