The German boxer is a medium-sized powerhouse with an impressive appearance. The playful and self-confident dogs are suitable as service dogs in various areas and act as playmates and protectors in the family circle. Although formidable in appearance, they are friendly with children and smaller critters and never lose patience. There are a few things to consider when buying puppies.

Contents hide
1 Compact and Maneuverable
1.1 Coat coloring of the German boxer – why only yellow?
1.2 All fur colors at a glance
2 The Story of the German Boxer – a Long Journey Across Europe
3 Nature and Character: Family Dog ​​with Professional Fitness
3.1 Typical boxer traits
3.2 The boxer is a family dog
3.3 The boxer as a guard dog
3.4 Incorrigible slobs

Boxers are medium-sized dogs with a maximum height of 63 cm at the withers. When compared to close relatives like the English bulldog, they appear rather athletic. Well-developed muscle groups and the balanced ratio of body length to body height make them appear very strong. Overall, they seem rather dark to some people, while others see the German boxer as a playful dog with a clown’s face. So be prepared that many people respectfully keep their distance when you are out with your dog.

Coat coloring of the German boxer – why only yellow? 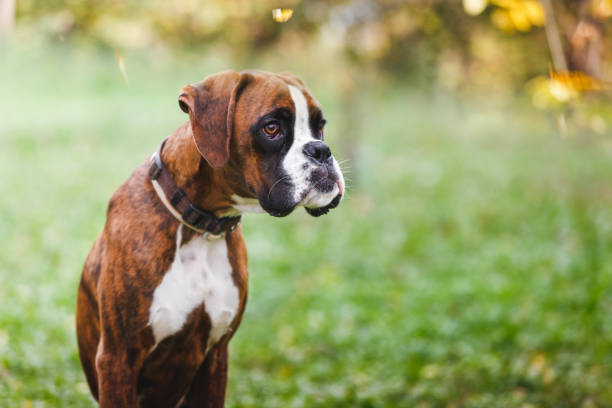 According to the FCI breed standard for the dog breed, only yellow and yellow tabby boxers are approved for breeding, although significantly more color variations are anchored in the gene pool. Occasionally dubious breeders even go so far as to kill white puppies because of their “breeding error”. Crossbreeding different color types has been shown to have a positive effect on the health of dog breeds. Some breeders are clearly opposed to the FCI’s restrictive requirements in order to be able to breed the disease-prone breed in a healthier way.

All fur colors at a glance

The Story of the German Boxer – a Long Journey Across Europe

The ancestors of the European bull-biter include Roman fighting dogs, which were used for warlike purposes and for arena fights against lions, bulls, and elephants as early as the time of Alexander the Great. These were crossed with Celtic hounds, whose impressive killing power is described in many Roman writings.

In the FCI breed standard, boxers are described as conservative and without insidiousness. Breeders confirm that the dogs prove to be trustworthy protectors who honestly communicate their intentions. Their excellent nose and fearlessness in serious situations make the dogs suitable service dogs for the police, the military, or disaster relief.

The boxer is a family dog 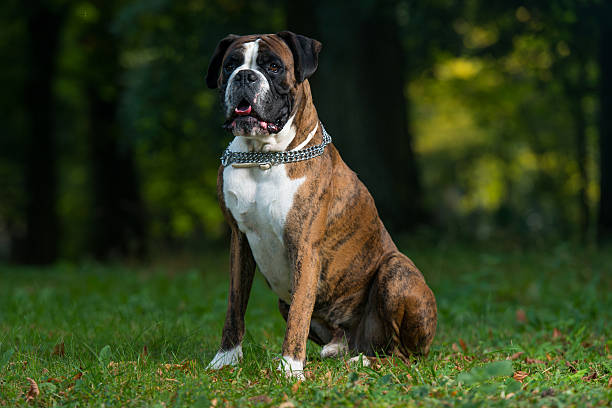 German boxers are popular playmates for families with children. With small children, the animals show a lot of patience. They play tirelessly and are not irritated by their protégés. They can also be easily socialized with smaller dogs and cats. The dogs are initially reserved towards strangers. Frequent visitors and friendly acquaintances give them a warm welcome in return and never forget a friend’s face. Male Boxers are often uncomfortable with strangers, but you can counteract this through good socialization in the puppy phase.

The boxer as a guard dog

Boxers are capable watchdogs and guard dogs, who are good at distinguishing between play and seriousness and react appropriately in every situation. A well-trained dog does not limit its owner through its protective behavior or become a danger to its fellow human beings. He reliably indicates abnormalities by barking and thus also intimidates potential burglars or attackers on the street.

Because their snouts are sometimes too short, boxers often have problems with temperature regulation and a relatively long tongue. This combination means that the dogs salivate a lot and sometimes some saliva hangs out of their mouths. After drinking, small drops of water on the kitchen floor are quite normal. Dogs also typically gulp down their food without chewing.