According to historians, the blood of the executed Queen Mary Stuart is said to have wet the fur of her animal. A number of royal dog lovers enjoy the pleasant and handsome companions, they even keep the lively little ones in packs.

Great Britain is home to many different dog breeds, King Charles Spaniel being one of them. A fun-loving, elegant, and compact four-legged friend looks back on a long history at the English court. Queens and kings live closely with the companion spaniel. Genes from crossbreeds including Pugs, Maltese, and old Spaniel breeds stand for the graceful dog. Closely related to the Cavalier King Charles Spaniel, the smaller Englishman is easily confused with the latter. 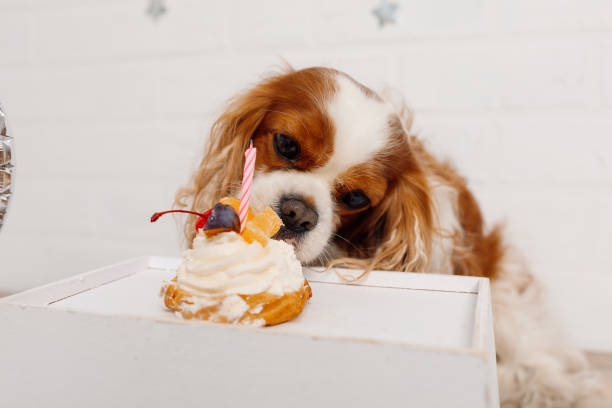 King Charles Spaniel, also known as the Toy Spaniel in this country, belongs to the FCI Group 9 of companion dogs. The breed originated in England. It owes its name to the two English kings Charles I and Charles II, who had a special affection for these dogs. Charles I, for example, enacted a law that the small spaniel was the only dog ​​breed allowed to enter the English Council.

Charles II loved the breed so much by the late 16th century that he let them roam free in his palace at Whitehall, avoiding the rumor that the king was putting the affairs of state on hold in favor of playing with his dogs. A well-known English writer of the time, Samuel Pepys, was very critical of the king’s immense affection for these dogs, going so far as to write that “all I could observe at court was the folly of a king who was always with playing with his dog and not minding his business”.

Soon the dogs were commonly known as King Charles Spaniels, often just called “Charlies”. When the English Kennel Club tried to classify the different colored breeds under the name “Toy Spaniel”, the then King Edward VII, who was also a great lover of these little dogs, objected. For this reason, the breed is still called King Charles Spaniel, in honor of the royal will. According to the breed standard, the ideal height is between 26 and 32 cm at the shoulder, the desired weight is between 3.5 and 6.5 kg. King Charles Spaniel’s coat is long and dense, with silky, shiny hair that can also be slightly wavy.

The breed comes in four different colors. Since most dogs had the original black and tan coat during the reign of King Charles II, this coloring is also referred to as “King Charles”.

The dog is profusely feathered on its ears, tail, and limbs. The coat colors are varied. Intensely shiny black and markings in lively mahogany tones form the Black and Tan variety.

Black spots and red-brown markings in the tricolor come into their own on a pearly white background. Abundant maroon patches on white fur give the coloration known as Blenheim. Lastly, the stocky breed of dog is seen in Ruby, an intense solid shade of red, sometimes with a spot of white on the chest.

To keep the coat shiny and healthy, regular combing with a coarse and fine comb and a good hairbrush is sufficient. Felt knots and tangles don’t stand a chance with daily use of the tools. Especially the ears and the other body regions with long fringes want a lot of attention. 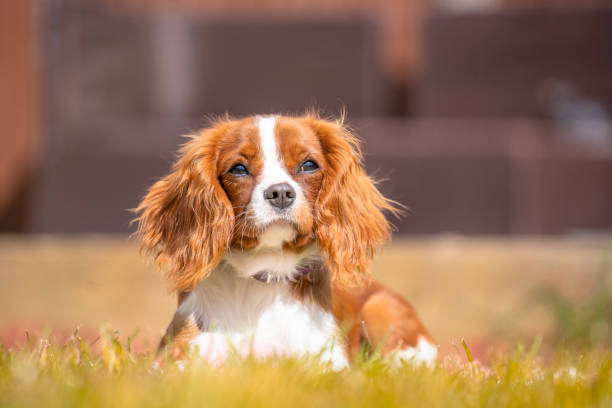 Although the intelligent King Charles Spaniel brings with him many characteristics that make it attractive to a variety of people’s lifestyles. The companion is one of the calm and balanced representatives. He is considered reserved, gentle, and peaceful. His efforts are aimed at maintaining close contact with his people. Here he is happy and adventurous, he loves to play with the not too small children who treat the animal with respect.

The small dog does not put even novice dogs to a hard test. By no means a timid companion and with a will of his own, he willingly accepts consistent training. It succeeds through a convincing alignment and with signals that the animal can understand. The aristocratic-looking lapdog is easy to motivate. Contact with other animals is not a problem, the spaniel is patient when dealing with them.

King Charles Spaniel is reserved with strangers. The same applies to his willingness to bark. When the English strikes, there is a valid reason for it – the biped just has to recognize it. Its small format has many advantages. When traveling, when visiting restaurants, or when it comes to accommodation, he has few demands.