The pug dog breed probably originated in China. There were pug-like dogs as early as the 9th century, which is undoubtedly the ancestors of today’s pug. The existence of the pug in western countries was documented from 1425, among other things, by drawings. The little powerhouse is cheerful, attentive, and intelligent. He is never aggressive and is easy to train. Because of his short nose, you should take care of him in the heat.

The coat is easy to care for, and the eyes and nose folds must be wiped daily. It is a small dog with a height at the withers of about 31 cm to 35 cm. According to the breed standard, his weight may be between 8 kg and 10 kg. However, bitches often weigh a little less and males sometimes weigh 11 kg without being overweight.

Sturdy and compact, the Pug appears a bit stocky and boxy overall due to its deep chest. This impression is reinforced by his well-developed muscles. The term “multum in parvo” is often found in connection with the pug, which means a lot of power in a small body = power pack.

However, it can also appear very slightly plump. He tends to be overweight and as with all small dogs, it is advisable to take extra care to ensure that the dog does not weigh too much. Therefore, as a buyer, you should know that feeding requires special attention. 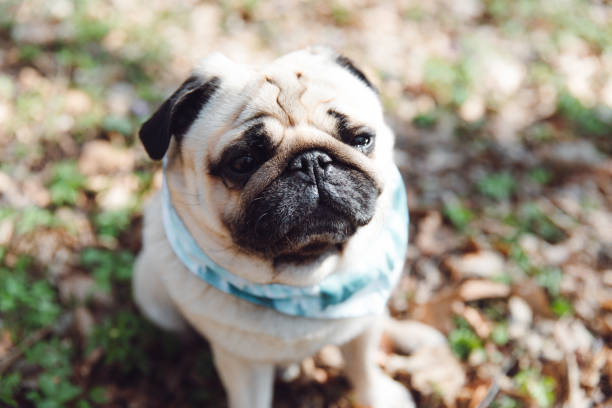 It is valued by its owners as a companion dog that is easy to lead. He is one of those dogs with a lot of personalities; people like to describe him as dignified, particularly intelligent, and downright charming. He is also considered to be cheerful and well-balanced, and his owners often describe him as very energetic and downright fun-loving.

He also communicates his well-being by loud snoring while he is sleeping. By nature, the pug is very affectionate and reserved. He is easy to train and is very attentive and intelligent. His lovable and never-aggressive nature makes him a suitable playmate for children.

He doesn’t need a lot of grooming and he doesn’t need long walks either. However, you should clean your eyes and the folds of your nose every day and take it easy on hotter days. Another character trait is his innate cleanliness and love for his master and family.

Although classified by the dog associations as a dwarf dog, it is distinguished from the other dwarf dog breeds by a stronger, more muscular physique. This makes it robust enough to play with children. Although he resembles a teddy bear with his beady eyes and blunt muzzle, parents should point out that he is not a toy but a delicate creature.

A dwarf dog like the pug is particularly suitable for single people to banish loneliness and bring joy. The health-promoting effect of small family dogs and lapdogs on the well-being of sick, old, and house- or bed-bound people are now generally recognized. Petting lowers blood pressure, accelerates recovery, and even with depression, the company of a pet is extremely beneficial.

Pugs make an effort to please their masters. They fit perfectly into the family, make jokes, and are sensitive comforters and the children’s closest friends. They really like being the center of attention and enjoy it too. They always want to be part of family life: if they are excluded, they can easily be offended. However, they are also quickly forgiving and not resentful.

Through their constant loyalty and attachment, they may become friends for life and make a great contribution to the well-being of their master.

The pug has a smooth, short coat that should be soft and shiny at the same time. The color of the coat is either silver fawn, apricot, tawny or black. He always has a black face mask and black ears. A streak and black beauty marks on the cheeks and forehead can also occur. Shaggy fur is not allowed. By the way: pugs shed a lot of hair!

The hair colors come in the colors uni black and silver-grey. Various shades of beige, ranging from apricot to white-yellow, can also be found. The base color is always in stark contrast to the markings, which are always black.

He has small, forward-dropping, beautifully velvety ears that form button ears. Rose ears are also allowed. The most prominent feature is its rounded head with the short, rather flat snout. The eyes are also striking; they are very dark and shiny. This optical appearance is called brachycephalic. Brachycephalic breeds often have breathing problems due to the shortened nose. Pugs are known to snore – also a result of the shortened snout. 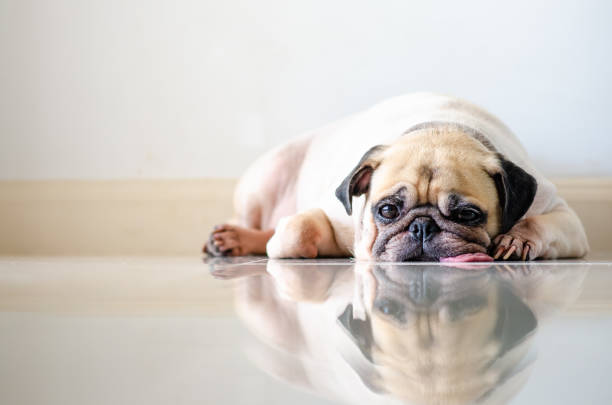 He wears his tail curled, optimal is double curled and set high; she is carried cheerfully.

What There is to Read about the Pug

The German name was taken from the word “Mops” used in the Baroque for grumpy people. The special facial expression of this breed may not have been entirely uninvolved in this. Its actual origin is still debated to this day. Some say it is a cross between different small bulldogs, while others claim it is a dwarf form of the French Dogue de Bordeaux.

However, many experts believe that the pug actually originated in China. From there it was probably taken to Holland by the Dutch East India Company before the 16th century. The then ruler William I of Orange was said to have been warned of the attacking Spaniards by a watchful pug, which led to the pug increasing in popularity and becoming a symbol of the Dutch monarchists.

In contrast, the Keeshond became the mascot of Republicans and the bourgeoisie. When the Catholic King James II was deposed in England and the Protestant William III. conquered the English throne, the pug came with him from Holland to Great Britain.