The Labradoodle is a young breed and is not yet recognized by the FCI. Despite this handicap, the Australian is becoming increasingly popular. This happy and uncomplicated four-legged friend is the ideal family dog.

Contents hide
1 History of the Labradoodle
2 Essence and Character
3 Getting a Labradoodle
4 What Do I Need to Pay Attention to When Purchasing?
5 Puppy Development and Training
6 How Do I Keep a Labradoodle?
7 Activities with the “Labradoodle”

History of the Labradoodle

The story began in 1989. A woman was looking for a dog for her blind husband. The problem was that her husband was allergic to dog hair. In desperation, she turned to the Guide Dog Association of Victoria. This association was responsible for guide dogs and was based in Melbourne, Australia. There the problem was recognized and it was not a one-time need. After much deliberation, the idea was born: to cross a Labrador with a Poodle. This “product” was given the name Labradoodle. This hybrid dog breed was a success and quickly became popular outside of Australia. The non-shedding poodle proportion made it possible for allergic dog lovers to own their own dogs. This dog breed has not yet been recognized by the FCI. 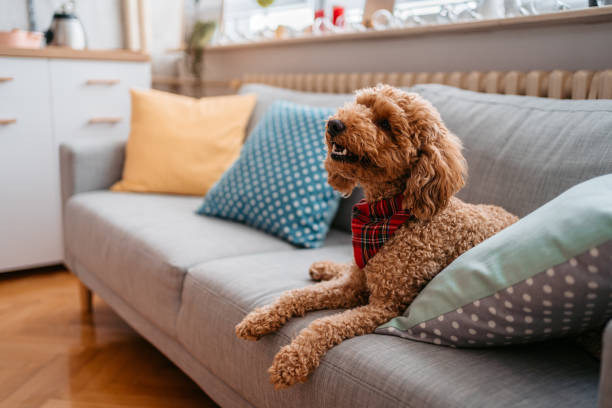 The Labradoodle character is a successful mix between a Labrador and a Poodle. Both dog breeds combine the best characteristics. Certainly, the ratio is not 50:50. Some specimens are more Labrador in nature and others are more Poodle in nature. This combination produced a friendly and affectionate dog. Because of his intelligence, he is teachable and can easily be kept busy with playful activities. This “clown” is the ideal family dog. He is tolerant and accepts other four-legged friends (dog, cat) in the family. He conveys his good mood every day to his people, whom he loves more than anything.

The size of the Labradoodle depends on the Poodle’s genetic makeup. The large specimens (standard) mostly descend from the king poodle. Labradoodle medium or Labradoodle mini is accordingly smaller. This does not mean that smaller poodles are crossed with a Labrador. Labradoodles are gradually being bred smaller. A Mini Labradoodle is the result of several breeding steps.

Despite this young origin story of the Labradoodle, there are sad circumstances in this dog’s life. Due to the high life expectancy (up to 15 years), Labradoodles can get into trouble (death of the owner). A Labradoodle in an animal shelter is unfortunately not a rare combination these days. There you can find an adult Labradoodle in black or brown and give it a new home.

Buying a Labradoodle puppy is an absolute matter of trust. It is not a registered dog breed, but a “mixed breed”. Despite this handicap, there are reputable breeders for the Labradoodle. You should definitely note the following points:

A Labradoodle is suitable for novice dogs. Especially since he wants to please “his people”. This dog breed is a cross between a poodle and a labrador. In some puppies, the traits of inheritance come out more clearly. You should definitely use the help of a puppy or dog school. A certain consistency is necessary for education. Beginners often find this difficult with this cute ball of fur. Above all, you should practice being alone right from the start. If he fails to do so, the adult Labradoodle can grow into a lovable bully. His philanthropy also has a catch. Which two-legged friend wants to be constantly jumped at by strange dogs (big or small)? You can easily get these two points under control with consistency. You can also find support from other Labradoodle lovers.

How Do I Keep a Labradoodle? 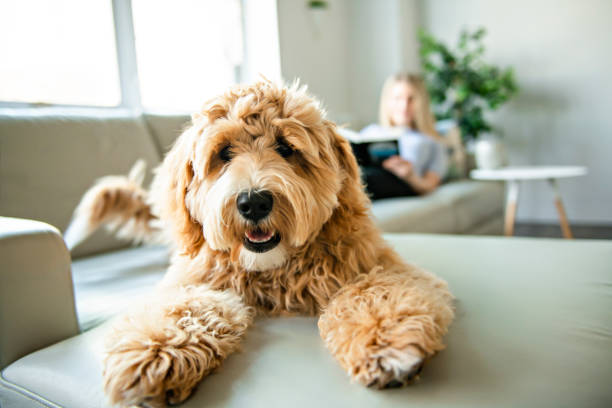 This friendly fellow always feels comfortable with his people. It doesn’t matter to him whether it’s an apartment or a house with a garden. You should compensate for the narrowness of an apartment with plenty of exercise and activity. Labradoodle sizes vary. Housing is more suitable for a smaller “issue”.

Activities with the “Labradoodle”

A Labradoodle is a lively and, when the young, lively dog. Movement is important and he enjoys it. He can really let off steam when he comes into contact with his conspecifics in the dog park. He can also be enthusiastic about dog sports (e.g. agility, retrieving, tracking). Cycling (depending on size) and hiking (caution: latent hunting instinct) are other options. He’s not an extreme athlete. Short laps around the block don’t do it justice.