Stately values ​​of the standard behind the FCI number 50. He is already a great guy at birth, he doubles his approximately five hundred grams in the first week and then persistently increases. The Newfoundland does not only impress physically. According to tradition, its roots go back about a thousand years. Vikings brought large bear dogs with them to Newfoundland, an island in the Atlantic Ocean in eastern Canada.

Here, the majestic four-legged friends grow from native animals, those from the Labrador coast, and the newcomers. In the course of colonization, the strong dogs gain great importance for the hard-working people as load and water workers.

Origin of the Newfoundland

The exact history of the Newfoundland dog is also unclear and has given rise to all sorts of imaginative stories and traditions. The so-called “Newfoundland legend” tells of Indians who lived around 3000 BC. Accompanied by a mastiff-like dog, they crossed the Arctic Circle to the coastal regions of the North American continent. 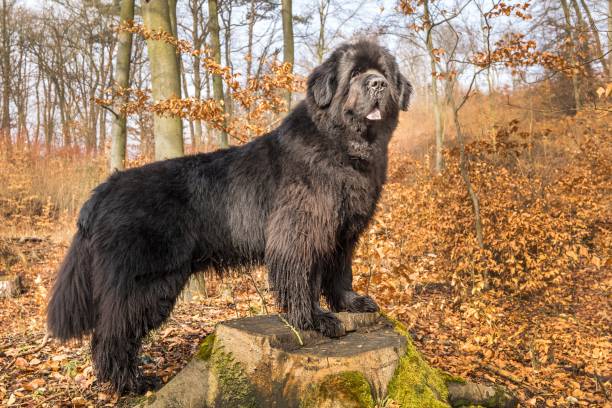 When the Vikings sailed to Newfoundland around 1001 AD, they had dogs of similar origins, so-called “bear dogs” with them, and the crossing of these two types was probably the origin of the Newfoundland breed.

Other sources believe that the actual ancestors were the Pyrenean mountain dog or the Portuguese water dog, which came to Newfoundland harbors in the course of the 16th century as companions to Basque and Portuguese fishermen respectively. At the very least, they may have contributed to the Newfoundland’s waterproof coat, excellent waterwork, and size and noble appearance.

At the time, large numbers of European fishing vessels were coming to Newfoundland, and since each vessel carried dogs on board, there was a very good chance that some of these European dogs would remain on the island and mix with the native “Indian” dogs.

In any case, the residents of Newfoundland and Labrador St. John’s were already breeding dogs as special helpers for fishermen and over the years two different types developed: the larger St. John’s Dog, which later became the Newfoundland and the Landseer, and the smaller St. John’s Dog, which is the ancestor of the water-loving and retrieving Labrador Retriever. The Newfoundland also has a natural passion for the wet element and together with its also innate joy of retrieval, the excellent swimmer was a natural rescue dog.

Used in many ways, they support fishermen by hauling in their nets. They collect flotsam just as successfully – figurative as well as living things. Around the turn of the 20th century, they almost died out in their area of origin.

In Germany, around one thousand puppies are currently documented every year. Even today, Newfoundland dogs save the lives of shipwrecked people. Man’s best friend in a truly impressive role. The Newfoundland dog’s outstanding swimming skills and human-friendly nature even allow him to jump into the water from a helicopter.

The Italians and French are pioneers in Europe. Retrieval and pulling ashore of casualties are practiced in Germany accompanied by a lifeguard. The strong body, a rod for steering, and round paws with skins between the toes give the rescuer comfortable equipment.

Caring for this coat is time-consuming and spending time in great heat is torture for dogs with this type of coat. Colors are monochromatic chocolate brown, bronze, or black. The FCI regards the black and white piebald breed as an independent breed, the so-called “Landseer”. In England and the USA, this is just another color variant of the Newfoundland dog.

The coat is double, greasy, and water-repellent, with a dense and soft undercoat. It is short on the head, muzzle, and ears. The front legs are long feathered and the hind legs are heavily tipped. The fur feels downright oily. Good protection in the water and in winter, rather limiting in high temperatures in summer.

In the warm season, shady places are a must as a retreat. In addition, the inherent smell of the coat cannot be dismissed out of hand. The maintenance effort of such a large and adequately equipped fur carrier is corresponding. Its fur, which comes in black, brown, or black and white, requires a special brush – preferably every day. Combs with coarse tines are suitable for this. 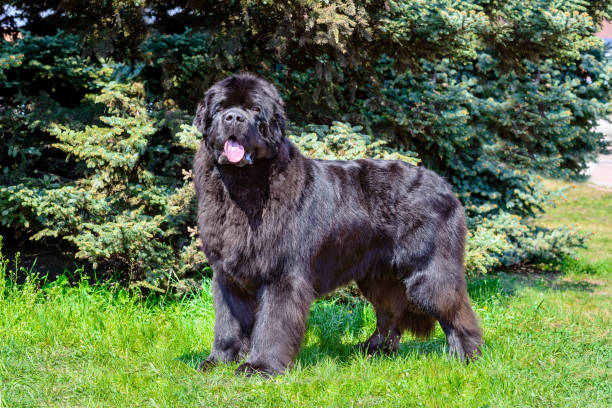 The everyday life of most Newfoundlands is kept less spectacular than that of rescue dogs. Whereby the peaceful and well-balanced family dog ​​can certainly be expected to do something. Guarding his party is part of that. He does this job unobtrusively and unequivocally, without much barking. Due to the physical presence, big fanfare is superfluous, if possible, he remains calm. The fact that training as a protection dog is out of the question for him fits in with this.

Despite his enormous size, he has a relatively modest appetite, eating about as much as most retrievers. According to the breeders, the reason for this is good feed conversion and his calm character. However, the calmness and apparent sluggishness of the big dog may hide the fact that this sensitive breed also wants to be trained. Early, harmoniously and lovingly.