The emergence of this dog breed, on the other hand, leaves plenty of room for different representations. The working dog protects Irish families, their houses and farms, and decimates rodents as well as rabbits, badgers, otters, and foxes. The tough four-legged friend is popular with both hunters and poachers.

The Kerry Blue Terrier originated in Ireland. The hilly coastal landscape of County Kerry represents the area he is said to hail from. So far the cynologists agree. It owes its name to its origins in the remote Ring of Kerry region, and the dog, chosen as the national dog of the Irish Republic, is sometimes also referred to as the “Irish Blue” or “Blue Terrier of Eire”, which in turn refers to its blue-tinted coat.

Blue in any shade and with markings in dark shades of hair color is standard for the breed. When they are born, little Kerry Blue Terriers are still black. The black should give way to the shade of blue after 18 months at the latest. The hair is soft and wavy, quite luxuriant but without an undercoat. An advantage for the dog owner is the barely perceptible smell of the animal. 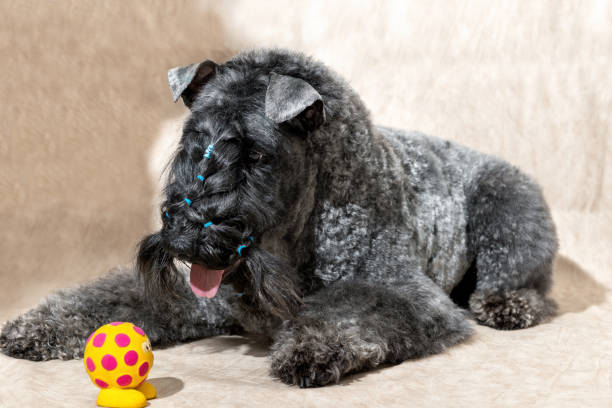 The relatively small, button-shaped, tipped ears and the thick tail carried upright, resembling a crescent moon, are characteristic. Another typical feature is the expressive head, covered by long hair. The dog’s square muzzle ends in a bushy beard.

The amount of effort that goes into grooming the Irishman is rarely overestimated. To prevent tangles, combing and brushing are recommended several times a week. In addition, there is the very demanding task of maintaining the breed-typical characteristics of the coat.

Its fur is very thick and finely curled, with soft, silky hairs. The special thing about the Kerry Blue Terrier’s coat is that the hair does not fall out by itself, but has to be combed out. At shows in Ireland, it is required that the Kerry Blue Terrier is always presented untrimmed with its natural coat condition, whereas in other countries the breed is trimmed to shape with scissors and then thoroughly brushed.

The very soft and wavy coat takes some time to groom and sets the Kerry Blue Terrier apart from all other terriers. As with the Bedlington Terrier, the puppies of the Kerry Blue Terrier are born black, the coat only acquires the striking blue and silver tones in the course of the first eighteen months and becomes even lighter with age.

This is due to the same gray or fading gene found in some Poodles and Bearded Collies. However, it is also partly assumed that the blue color is due to the crossing of Bedlington Terriers, which were kept in large numbers in Dublin towards the end of the 19th century. Skillful handling of the scissors requires practice and experience. The beginner forgives nothing if he gets advice and support from the expert.

The breed, recognized by the Irish Kennel Club in 1913, is still most widespread in the British Isles. It has been listed by the FCI since 1922 under the standard number 3 and was first entered in a German studbook in 1928. The long-legged terrier stays just below the 50 cm mark at the shoulder and weighs up to 18 kg. His body is muscular and has a stately appearance. The Kerry Blue Terrier is a versatile, confident, and people-friendly representative.

As with its cousin, the Irish Terrier, the exact origin of the Kerry Blue Terrier is virtually non-existent before 1800, leading to its past being shrouded in mystery. Legend has it that the progenitor of the Kerrys swam to the Irish coast from a ship that sank in Tralee Bay in the late 1700s. Elsewhere, however, it is claimed that the Kerry Blue Terrier is descended from the dogs that made it to the coast of Ireland alive after the Spanish Armada was shipwrecked in 1588. 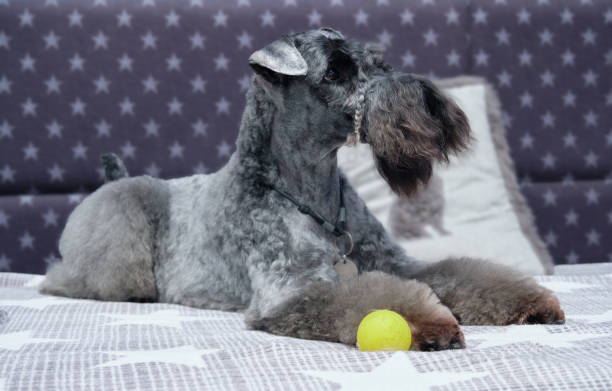 However, everyone agrees that the surviving castaway was assumed to have been mated with local terrier breeds, from which the dark blue coat was firmly associated with the type and nature of the terrier.

In the same context there is also evidence of “blackish-blue” terriers, which are said to have originated in County Kerry and other areas, from which it was concluded that the ominous “castaway” found his mates here, hence the blue coloring of the coat originated.

Another guess is that the Kerry Blue Terrier is a relative of the Irish Wolfhound. If the rather improbable story with the surviving “castaway” should correspond to the facts, then the question still arises as to what type of dog it was.

It could either have been one of the shaggy shepherd types that brought the long coat with fading pigmentation and herding traits to the native terrier breeds, or it could have been a water dog of the type which was also the ancestor of poodles, water spaniels, and Portuguese water dogs and who was responsible for the Kerry Blue Terrier’s water worthiness, frizzy coat and gray factor.