The Kangal does not want to please at any cost. He sees himself as the guardian and protector. He is a friendly dog but will be wary of strangers and may react quickly. Shepherd dogs were and are still used today. They hold the herd together, protect and defend it.

When humans settled down, the shepherd dog was also given the task of guarding the farm. These characteristics: keeping the herd together – protecting – defending – guarding were maintained or developed inbreeding. In this respect, it is not surprising when this dog breeds suddenly tear themselves away and see a car like an animal to be guarded. (“Dog suddenly ran into a car for no apparent reason.”)

The Kangal is a separate breed from the Anatolian Shepherd Dogs. Since the 1960s, Kangal pairs have been exported to various countries around the globe and thus became widespread. In Turkey, he is now so popular as the national dog that a coin and two stamps were dedicated to him.

Like all herding dogs, the Kangal belongs to the large and muscular dog breed. The adult male reaches a height of 65 – 78 cm. He has very fine and densely grown fur with a thick undercoat. The fur is shorter in the summer months than in the winter, between three and seven cm. The color of his fur ranges from light cream to dark grey. Its face and hanging ears are black.

The eyes are always dark and match the color of the fur. The coat should be brushed well several times a week.

The Essence of the Kangal

People who are new to handling and training dogs should definitely consider a breed other than the Kangal. He brings a friendly temperament but also a certain character and he needs a straight attitude. Furthermore, it definitely does not belong in a city apartment. This dog needs daily exercise, adequate exercise, and a meaningful task.

When the Kangal Barks

The barking of the Kangal is relatively easy to distinguish. A steady bark indicates that it has detected something in its protected zone. The intruder is warned from afar and keeps an eye on him. As the barking increases in volume and speed, he becomes aware of potential danger in his area and turns his attention to it.

If the Kangal begins to growl menacingly and bare its teeth, it perceives the object as dangerous. The closer the respective animal comes, the greater the danger of being attacked by the Kangal. Again to understand: From the dog’s point of view, he protects and protects.

Interesting Facts about the Kangal

The Kangal has been trained in the army in Turkey since 1975. It must be assumed that within this training program he was trained in defense and quick response that will influence the behavior of the next generations. 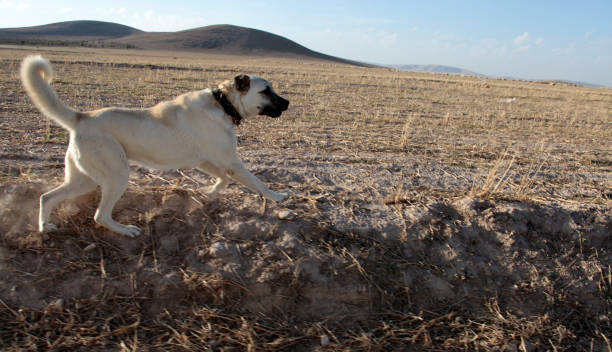 The breed is classified as “potentially dangerous” in Hamburg and Hesse. If you want to get a Kangal, you should know the place of birth. A dog from Turkey is not recommended due to the consequences of military training, but also the uncontrolled reproduction of the breed.

At this point an important note on the subject of “dangerous dogs”. Anyone who wants to get a dog should be aware of a dog’s needs beforehand. Breeds that belong to the hunting and companion dogs or shepherd dogs in particular have a certain behavior in their genes that cannot be changed.

A dog owner needs to be aware of this. These dog breeds may be able to run towards small moving objects (from the dog’s point of view) because they were bred by humans to herd a herd and protect them from enemies such as a fox. If the owners are overwhelmed, many dogs end up in animal shelters. There are always reports in the press about attacks like here – here or here.