Baby rabbits are incredibly cute. Therefore, rabbit owners often have a desire to breed offspring. But that has to be well thought out. Find out here what to look out for when breeding rabbits – and when it is best to discard this idea.

Contents hide
1 Raising rabbits means responsibility
2 The mating of rabbits
3 Important preparations for the offspring of your rabbit
4 The time has finally come: the rabbit offspring is here
5 Offspring in rabbits: the right age

Small rabbit breeds are sexually mature at three to four months. It is therefore important to deal with the issue of offspring in rabbits at an early stage. In order to prevent undesired reproduction, bucks in pet keeping are usually castrated before they reach sexual maturity. 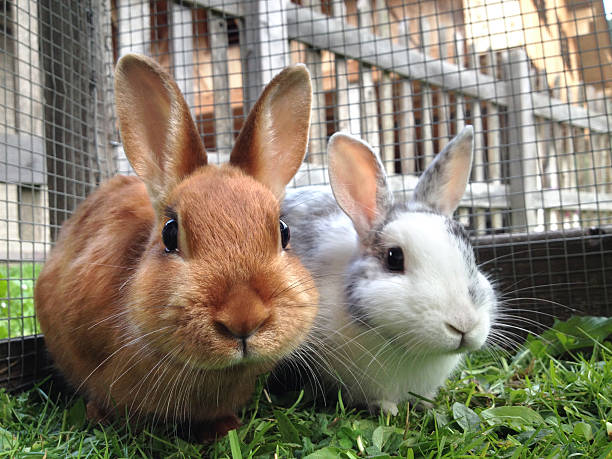 It is important to deal with the issue of offspring and the castration of male rabbits since thoughtless and uncontrolled propagation should be avoided in any case. Because the decision to breed also means great responsibility. Careless and thoughtless pairings very often lead to great animal suffering: they often end with the offspring being handed over to an animal welfare organization or eking out their existence under poor housing conditions.

If you want to have rabbit offspring and meet the requirements for this, you must obtain comprehensive information in advance, because responsible rabbit breeding requires the necessary knowledge about rearing and genetics as well as the necessary stables. If the mother rabbit cannot take care of her young after birth, you should also be prepared for possible hand-rearing of the baby rabbits. If you would like to witness the birth and rearing of rabbits, it is best to contact an experienced breeder.

The mating of rabbits

Domestic rabbits do not have a fixed reproductive period. The rabbit’s ovulation is triggered by mating and occurs about nine to 13 hours later. The mating takes only a few seconds. After a gestation period of 29 to 32 days, about three to five young are born in dwarf breeds. Immediately after birth, the females can be successfully mated again.

Important preparations for the offspring of your rabbit

Pregnant female rabbits begin building a warm nest for the young about ten days before birth. To do this, they use the bedding, straw, and later fur hair, which they pluck out. Of course, you should not remove these under any circumstances, but on the contrary create a small nest yourself with edges that are not too high if the rabbit fails to do so, for example out of inexperience. You should also make the following preparations:

The time has finally come: the rabbit offspring is here

After birth, the mother licks her young and eats egg skin and afterbirth. The young are born hairless and blind. The birth itself usually goes without any problems, but you should check the nest at least once a day and look after the young: Since they only open their eyes after about ten days, it can happen that they tumble out of the nest and cannot find their way back. Then you should put them back carefully so that they don’t cool down. This is how the baby rabbits develop:

Offspring in rabbits: the right age

Although rabbits become sexually mature at an early age and can therefore produce offspring biologically, they are only suitable for breeding from the age of six to seven months (for dwarf breeds) or ten months (for giant breeds). If the rabbits are mated too early, it can happen that the mother does not accept the young or even eats them. This is one of the reasons why it makes sense to check the nest frequently. In addition, the rabbit should not have too long claws on her hind legs, otherwise the young could be injured during birth.

Before the young animals reach the reproductive age themselves, you should also have the sex determined and separate them from each other or castrate the males so that they do not have offspring again prematurely and undesirably.