The Saarloos Wolfhound has its origins in the Netherlands and is counted in FCI group 1 of herding and cattle dogs. According to the breed standard, the size should be between 70 and 75 cm at the shoulder and the desired weight is 36 to 41 kg. The coat of the Saarloos Wolfhound is short and dense, the coat colors are brown and grey-ground wolf, agouti, and light cream to white. Small white markings are allowed.

History of the Saarloos Wolfhound

The Dutch geneticist Leendert Saarlos had already dealt intensively with many animal species, especially the different dog breeds, during his studies. He finally came to the conclusion that overbreeding of domestic dogs had made them far too soft and susceptible to all kinds of diseases.

The wolf, on the other hand, he believed, was not susceptible to the bacteria that first made domestic dogs ill and then killed them. So in order to breed purebred dogs back to their natural health and disposition, in 1930, he began an attempt to cross a she-wolf with a German shepherd in cooperation with a zoo.

The breeding goal of Saarlos was to create a “dog” that combines both the keen senses, the excellent ability to react, and the innate caution of the wolf as well as the willingness to learn and connect to people, which characterizes the German shepherd dog.

However, his theory of the innate resistance of wolves quickly proved to be wrong when the wolf from the zoo succumbed to a viral disease. However, another she-wolf was immediately made available to him and so he was able to start his breeding attempt after all.

With the active support of the geneticist Professor Hagedorn, a very strict breeding selection for health and temperament in the offspring of wolves and dogs followed in the next few years. He also ran planned back breeding to the German Shepherd Dog.

Carlos was not discouraged by a few setbacks and then achieved one or the other success of the animals he called “European wolfhounds”, for example as guide dogs for the blind. Saarlouis was so convinced of the breed he had created that he tried to convince the police and various rescue organizations to support him, but was unsuccessful, because of the wild wolf’s innate basic characteristics, instinct to flee, caution, and reserve, could not be bred away.

The Saarlouis Wolfhound is calm by nature. He rarely barks but does warn the homeowner in his own way. He is also not a guard dog at all and is exceptionally stubborn. It is therefore extremely unsuitable for obedience and protection dog tests. But then he can be an attractive but never comfortable companion. A single dog is not prone to stray, but they are quite happy to go off on their own in the company of others.

You should never put the Saarlos Wolfhound in a kennel, it is very easy for him to panic in a fenced enclosure. Keeping them isolated increases the already lacking socialization among humans. If a new dog comes into the pack that does not understand or even questions the existing pack order, problems can arise. 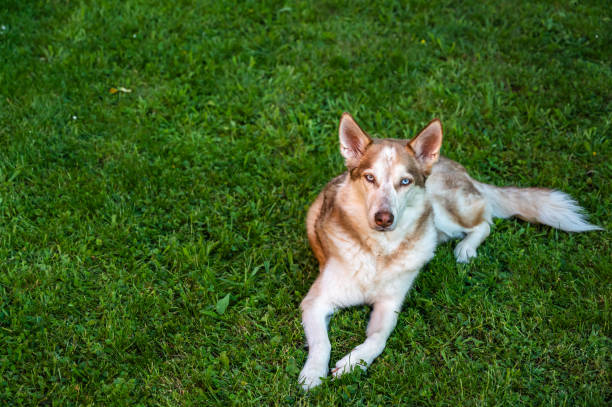 Most owners keep at least two animals to create the “pack” they need. Another cross between a German shepherd and a wolf is the Czechoslovakian wolfhound, called “Ceskoslovensky Vlac” in its homeland. It is bred there as a service dog for the military, is ideally 70 cm tall, and has yellowish, wolfish, or silver-grey fur. His character is temperamental, persistent, and docile, but without having cadaver obedience.

He is also characterized by an excellent ability to react, an excellent sense of direction, and sharp senses. Although he is very suspicious of strangers, he never attacks without a reason. Unlike other dogs, most specimens of this breed don’t bark, they just howl. It is typical of the Czechoslovakian Wolfhound that the bitches come into heat only once a year.