His temperament helped the Yorkshire Terrier at work. Likewise his courage, his vigilance, and the tendency to want to defend the quarter and the people living here. Loud and energetic when it became necessary.

Around 1850, specimens of the hitherto unknown breed, which were twice as large as they are today, are described in detail. At that time, the inhabitants secretly used their hunting instincts and were not allowed to add the game to their diet with impunity. With the little helper, poaching succeeds inconspicuously.

The breed of FCI classification number 86 is fearless and self-confident, the hunting instinct is still awake. Yorkshire Terriers have been making friends in Germany for around a hundred years. The lover of the breed is advised to take a close look at the breeders who are suitable for buying a dog. 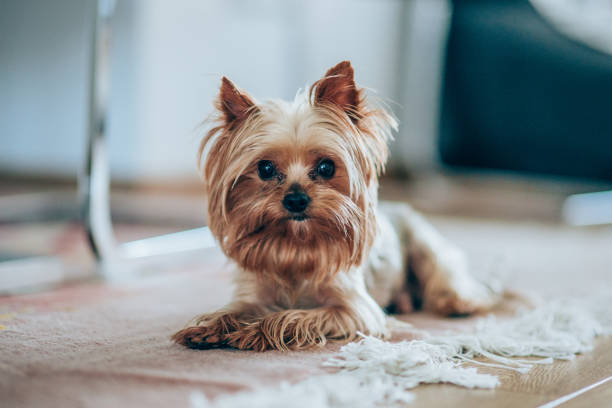 In the past, dubious animal dealers paid far too much attention to their wallets than to appropriate breeding goals. This is the only way to explain the trend of wanting to bring smaller and smaller Yorkshire Terriers to animal lovers. Sometimes with the help of specially created breed names.

In modern times, the informed dog owner who wants to give a Yorkshire Terrier a species-appropriate home knows that they will not be in a relationship with a lapdog per se. He will take his companion seriously. He comments on and channels Briton’s need for communication as early as possible so that it doesn’t escalate into uncontrolled barking.

He is an extremely lovable housemate, ideal for people with a small living space, and is not particularly impressed by larger dogs or strangers. He also never hesitates to sound the alarm if he senses danger. The man knows how to talk animals out of their tendency to overestimate themselves in every respect.

Origin of the Yorkshire Terrier Breed

Despite its relatively young age, not too much is known about the exact origin of the Yorkshire Terrier, since the breeders of the time did not want to reveal the secret of their success for financial reasons.

It is believed that Scottish workers looking for work in the textile mills in the Yorkshire area brought various terriers with them. Certainly, the now-extinct Clydesdale Terrier and the slightly larger Skye were among them. The native Maltese brought the long, silky coat, the steel blue coat color is said to be derived from the blue variant of the Black & Tan Terrier.

From further crossings of local breeds such as the Leeds Terrier, the Manchester Terrier, and the Dandie Dinmont Terrier, a terrier emerged over time, which at 5.4 – 6.4 kg was originally much larger than today’s specimens.

However, as the wealthy families in Yorkshire always preferred smaller dogs, the breed was miniaturized by continuing to breed with the smallest animals. Through the practice of crossing larger bitches with tiny males, weight at the time varied from less than 3 pounds to as much as 12 pounds.

Yorkshire Terrier – cute, handy, a ray of sunshine on sometimes fur-hidden legs. A dog that weighs up to three kilograms and grows to be slightly larger than a good 20 centimeters at the shoulder.

The book contains a lot of information about the dog breed Yorkshire Terrier. The author gives tips on the keeping, training, and occupation of the little terrier. The animal fits into every living environment – one would think so. Most Yorkshire Terrier owners will draw a more differentiated picture of their companion if asked.

Do you know about the power of the little one, about the need for training, which is in no way inferior to that of larger dogs? It is dog owners with experience who show the small dog how it can develop into a sunny, happy four-legged friend that is welcome everywhere. 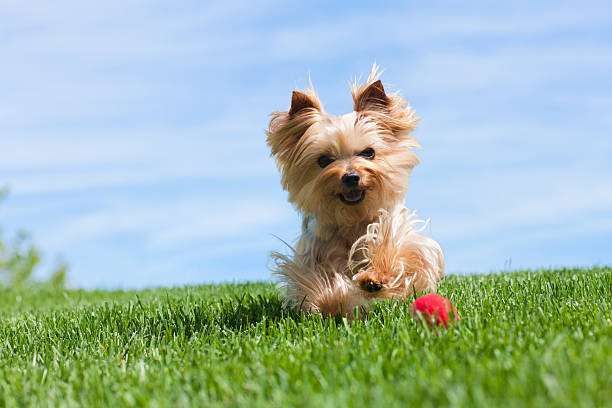 Regular brushing maintains the silky structure of the coat and its climate-regulating function. The straight hair falls evenly on both sides of the parting from the head to the tail. Rich golden to golden yellow on the head with small V-shaped ears.

A steel blue color dominates the body, lighter at the tips than at the roots of the hair. A hair clip may appear as a fashion accessory, but primarily it protects the eyes. A Yorkshire Terrier’s adaptability also comes into play when keeping the little one busy. His need for employment levels off in such a way that it fits in with everyday family life.

There must always be room for social contacts and variety for the busy four-legged friend. He is an active and persistent companion for people with a weakness for nature and hikes. He happily digs to hunt rodents, rummages under bushes, or chases after the dummy with vehemence.

He doesn’t even change his hair like in short-haired breeds – to the delight of every housewife. Despite its length, Yorkie hair is relatively easy to care for with regular brushing due to its silky texture.