In Germany, the Airedale Terrier is one of the best-known dog breeds. It is a separate breed recognized by the FCI and is listed there among domestic dogs in Group 3, Section 1, Standard No. 7.

It can be assumed that farmers in the Aire Valley were the first breeders of the Airedale Terrier, which is so popular today. The Airedale Terrier was created in the course of the 19th century by crossing the Otterhound with fierce terriers such as the now extinct Black and Tan Terrier, the Broken-Haired Terrier, and the also extinct black and tan Old English Terrier.

The terriers brought mobility, good eyesight and ears, and courage. However, they lacked the good nose and swimming ability that the Otterhound then contributed to the new breed. The Collie is said to have been crossed because of its sociable nature. This is how the Airedale Terrier developed over time through consistent selection, which distinguished itself as a water-loving and predatory hunting dog for otters, water rats, martens, polecats, and also for waterfowl.

The workers and farmers at that time may have wanted a dog that could be used in many areas. To do this, they crossed otter dogs with the medium-sized English terriers, which were already very widespread at the time. But the intelligent, robust, and versatile dog was also used to hunt bears, deer, wild boar, and deer. Around 1860 a uniform breed had emerged and these dogs were initially called Working, Waterside, or Bingley Terriers. 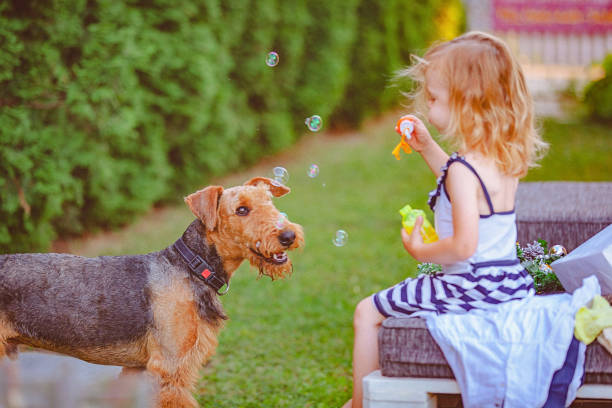 They were given their own classes at agricultural exhibitions for the first time in 1879. The breed name, which is still in use today, came about when an enormous number of Waterside Terriers were entered at the Airedale Agricultural Show. When one of the sons of the famous Airedale Terrier Ch. Master Briar was exported to Philadelphia around 1900, the triumph of the breed in the USA began.

Scottish Shepherd and Gordon Setter’s blood was also brought into the breed. This happened around the middle of the 19th century. The breed that was created in this way was initially known as the “Working Terrier” or “Waterside Terrier”. Dogs similar to Airedale Terriers were shown to have been exhibited for the first time in 1875 as “Bingley Terriers” and “Waterside Terriers”.

Five years later, however, these dogs were seen at dog shows as “Airedale Terriers,” and they have retained that name to this day. The Airedale Terrier studbook had its first entry in 1882, four years later the breed was officially recognized by the British Kennel Club.

The Airedale Terrier has a hard, wiry coat with close-lying, slightly wavy hair. He also has a pronounced undercoat. In terms of color, black or dark gray predominate. The head, ears, tail, lower body, and legs are mostly brown or tan.

Although the coat has the positive property of hardly shedding, it must be brushed and combed daily and trimmed at regular intervals. A distinctive feature of the Airedale Terrier is its small, side-carried, V-shaped tipped ear, folded towards the head but not pointing towards the eyes.

The height at the withers in males is between 58 cm and 61 cm, in females between 56 cm and 59 cm. The weight is 22 kg (bitches) to 30 kg (males). At this height and weight, the Airedale is considered the largest English terrier and is also known as the “King of Terriers”.

In Germany, the fox terrier and the Airedale terrier are the most well-known terrier species. In the past, the Airedale was often used as a service dog in the military and police sectors. An Airedale Terrier named “Jack” was even posthumously awarded the Victoria Cross for bravery in the field. Many Airedales were also used by the Russian Army and the Red Cross during the First World War and also during the Second World War they served as helpers in many armies.

This is due to their historical development: the first breeders of the Airedales, who consisted of farmers, workers, miners, and hunters, had bred this breed for versatility. From the very beginning, these dogs were used both for herding work and for otter hunting, which was very popular at the time. They were also popular as guard dogs and were even used in dog fights. Although these dogs were not visually appealing, they were often seen with the ladies, as they were an effective deterrent against muggers. 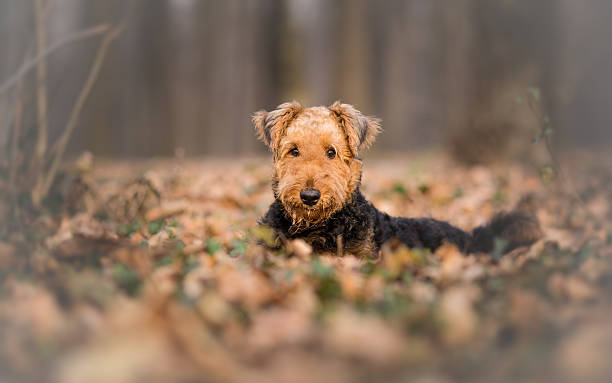 The German military discovered the diverse uses of the Airedale terrier early on and published a recommendation for this breed as early as 1894. Since then, these dogs have been successfully used in all military fields. He was already valued at the time for his indestructible robustness and courage. In the First World War, all German Army Dogs were Airedale Terriers, in the Second World War their share of the Army Dogs was still 33%, which put them ahead of Dobermans and Boxers.

Outside of the military area of ​​application, the dogs were often used e.g. B. used in bear hunting in Canada or chasing tigers in India. Hutchinson’s Dog Encyclopaedia wrote: “The breed was long held in high esteem by all the armies of Europe and Asia. The dogs are easy to train, properly trained they show an excellent nature and do their duty with a lot of dedication, almost superhuman intelligence.

They work primarily as reporting dogs and medical aid dogs and have tracked down many wounded. In fact, the dogs’ intelligence was so acute for locating the wounded that during the Russo-Japanese War they often embarrassed the Japanese victors by always finding and sending out the Russian wounded first, and Japanese soldiers last.

The Airedale’s sense of smell is remarkable.” Today, Airedale Terriers are used to hunt big game in Africa, India, Canada, and the United States. In England and Germany, the breed was one of the first to be used for police service. It is said that the Airedale Terrier can do everything that other dogs can do – and then some.