English Setters are beautiful and irresistibly charming. Nevertheless, English Setters can prove to be outright stubborn. And her passion for hunting should not be underestimated. Find out everything about the dog breed English Setter here.

English Setters are extremely popular pedigree dogs among dog lovers. Here you will find the most important information about the English Setter.

Origin of the English Setter 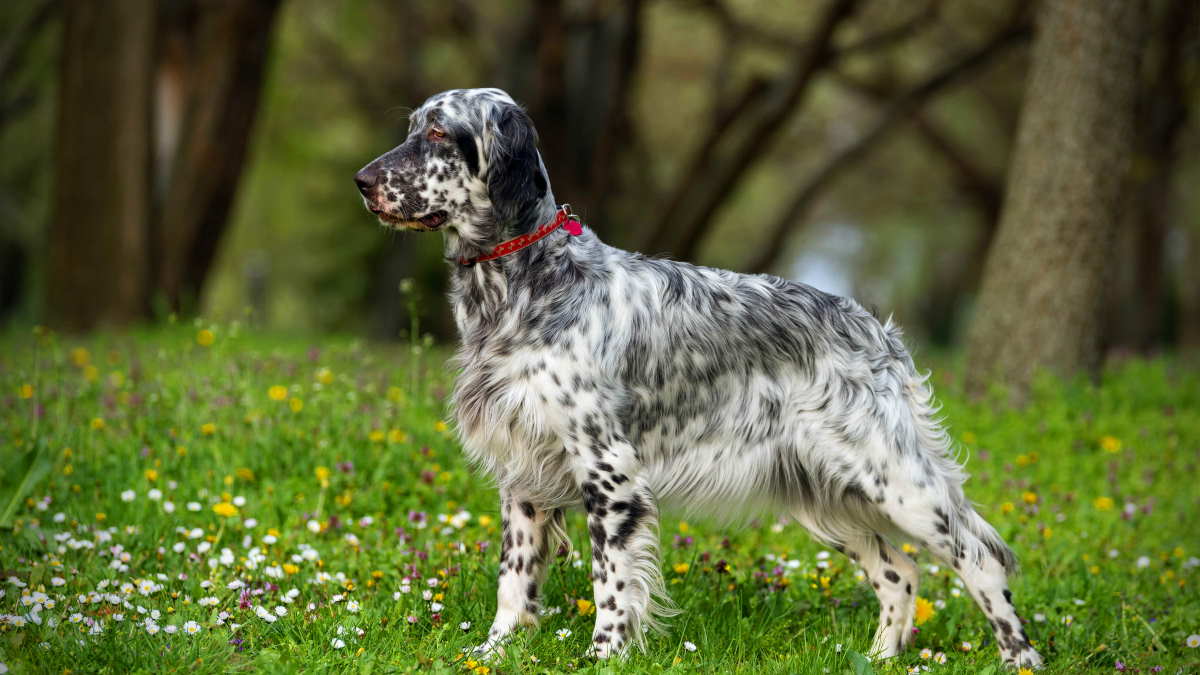 English Setters are an ancient breed of dogs. They go back to the Spanish Perdigueros and long-haired spaniels. As early as the 17th century, English Setters were popularly kept on large estates in Great Britain. Special breeding for different areas of application only took place later. The typical color name of the English Setter “Belton” goes back to a village of the same name in Northumberland.

The appearance of the English Setter

Typical of the breed, English Setters have a long neck with a strong nape and a low-lying chest. The body is only moderately long in relation to the height at the withers. The hindquarters of the English Setter are strong. The tail is usually carried in line with the back.

Full utilization is only appropriate when the setter is fully grown. The long-legged, rectangular dogs should climb as few stairs as possible during the first few months. Once all the growth plates are closed, many setters remain resilient and agile into old age. With up to 15 years they are – as a relatively large dog breed – comparatively long-lived. The long ears require regular checking and cleaning.

Coat and colors of the English Setter

Grooming the English Setter’s coat is relatively time-consuming. Regular use is required to ensure that the dogs, which come in the colors Blue Belton, Orange Belton, Liver Belton, Lemon Belton and Tricolor, have a well-groomed appearance. The long feathering on the front legs, the trousers on the hind legs and the longer hair on the chest and underside of the abdomen bring plenty of twigs, leaves and burrs into the house.

The sometimes very hairy paws of the all-terrain English Setter leave large mud tracks in bad weather if the hair between the paw pads is not trimmed regularly. The back fur of the English Setter is trimmed every 6-8 weeks so that the elegant body contours come into their own. Clipping is not an option because it destroys the breed’s coat texture.

Temperament and training of the English Setter

When it comes to gentleness, friendliness and tolerance, English Setters are hard to beat. No matter how turbulent everyday family life gets, the elegant Britons are never angry and are also devotedly tolerant when dealing with children. They get along well with other dogs and prefer to avoid arguments. This depends on the appropriate socialization and upbringing.

The upbringing – a sticking point for the English Setter, which requires as much empathy as consistency. It is important to find a way that the smart four-legged friend can understand and respect. Too much pressure is met with incomprehension by the sensitive setter and quickly leads to introverted, anxious behavior.

Inconsistency, on the other hand, fuels characteristics of the quite stubborn dog, which are also undesirable in living together. English Setters like to make their own decisions. They tend to only listen when it suits them and go their own way without hesitation. Clear rules are all the more important, right from the start.

Keeping and caring for the English Setter

Depending on whether the English Setter comes from a performance breed for hunting or from a breed more geared towards exhibition qualities, his passion as a hunter unfolds. Anyone who has no hunting ambitions should not choose a setter from a performance breed. The innate qualities of the passionate pointer, which excels at working in the field on game birds, would atrophy and leave room for imbalance.

Breeding more towards family and show dogs, a setter doesn’t need to hunt to live a happy life. But he still needs a lot of exercise, variety and close family ties.

Not only do setters love to run, they also bond very closely with their caregivers. Being left alone is not at all Setter’s taste and unless trained from an early age, be prepared for pervasive dirges.

Together with its people, the Setter can be enthusiastic about many things. He proves his endurance as a riding companion dog. The outstanding nose performance convinces when tracking. When jogging or cycling, he is a cheerful companion. His gentleness and friendly nature predestine him as a therapy or visiting dog at schools.

A special diet of the English Setter

When it comes to food, many English Setters are special. English Setters often seem far less focused on food and can be fussy at times. Also an aspect that can be controlled with consistency. If the English Setter doesn’t like it, he’ll turn away with a disgusted look on his face, pull away, and settle in a corner with accusing moans and sighs. Incidentally, this moaning and sighing is just as typical of the breed as the frequent changing of the resting place as soon as boredom spreads. 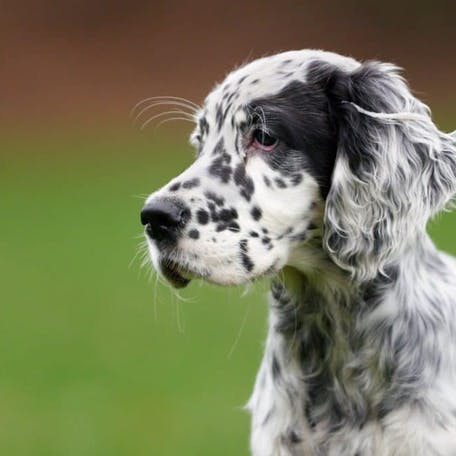 Setters are a long-lived and overall quite healthy breed of dog for their size. Hip dysplasia (HD) is still an issue that worries responsible breeders. Adjusted feeding that does not promote too rapid growth is important for the English Setter during rearing. Frequent climbing of stairs and intensive physical exertion should also be avoided until the dog is fully grown.

Since deafness can also occur in English Setters due to their color, dogs approved for breeding must be able to hear in both ears. The long ears are susceptible to contamination, which can promote yeast fungus, for example.