With its imposing appearance, the good-natured Landseer makes quite an impression. But it is the lovable nature of the water-loving giant that will impress you. Despite its independence, the Landseer is extremely people-oriented and a fantastic family dog ​​that seems to be alien to any kind of aggressiveness.

Contents hide
1 Landseer history
2 Essence and Character
3 Purchase of a Landseer
3.1 What do I need to pay attention to when purchasing?

Since the new dogs not only delighted the fishermen but also found their way into the households of the nobility and upper-middle-class, a “Newfoundland Club” was founded in England as early as 1886. Appropriate standards have been set here. Targeted breeding began. By the end of the 19th century, the Newfoundland dog with a white and black coat had almost been forgotten in England, because the dominant heredity prevailed and there were hardly any puppies with a white and black coat anymore. 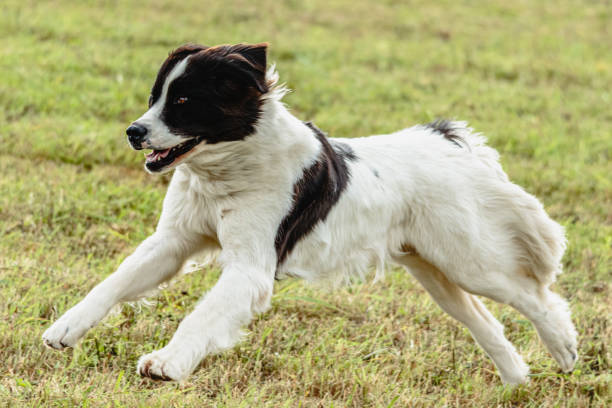 We owe the Landseer with its white and black coat to cynologists from Germany and Switzerland, who discovered the variant of the Newfoundland dog that was hardly ever used for breeding in England and used it for breeding. So the gentle giants not only came to continental Europe but were also used for pure breeding of the white-black type. In order to clearly emphasize the pure breed of the type and the difference from the original Newfoundland with a black and white coat, the breeders gave the new breed the name Landseer. The namesake was the painter Edwin Landseer. The painter was known for his animal paintings, in which he often drew white and black dogs. The Landseer was recognized as an independent breed by the FCI in 1960. However, there are still Newfoundland dogs with a black and white coloration, but they are still in the minority.

Due to the common ancestors, the Landseer and the Newfoundland are very similar to this day. Nevertheless, there are also differences and so the Landseer is considered more agile. You will soon find out that the mere sight of a Landseer can have a relaxing effect. This is because the Landseer exudes a fascinating serenity that is second to none. But not only does his look radiate serenity, the Landseer is a good-natured and friendly character through and through.

As a human-friendly fur nose, the stately Landseer is extremely affectionate and loves children. Thus, the gentle giant is a friendly family dog ​​that is a loyal and reliable companion for all family members. Despite his good nature and stable character, the alert Landseer definitely distinguishes between friend and foe and can become a fearless protector if necessary. So the dogs can appear determined to protect their “loved ones”.

The love of water seems to be deeply rooted in the genes of this easy-going dog. The Landseer is considered an excellent swimmer and can easily save people from drowning. To this day, its intelligence and ability to make its own decisions ensure that the animals are trained and used as water rescue dogs.

Purchase of a Landseer

If you are enthusiastic about the Landseer dog, then you should not only factor in the acquisition costs of around €1,400, but you must also be aware that the large dog also needs a lot of food. In addition to the monthly costs, you should also factor in regular visits to the vet and be sure that you can offer the Landseer a loving home for the next 10 to 12 years and possibly more. Unfortunately, there are always Landseers in need who, despite their loving nature, are waiting for adoption in the shelter. If you don’t insist on a puppy, you can also get a Landseer dog from the animal shelter, because the Landseer will thank you and give you all his love and affection. 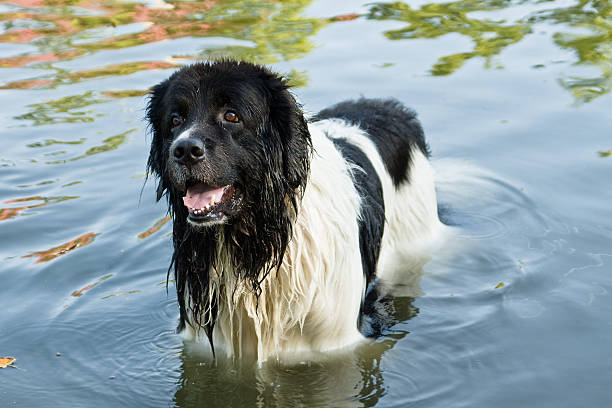 If you decide to get a Landseer puppy, you should visit the breeder in advance. Not only pay attention to the pedigree but also have the veterinary documents of the puppies and the parents shown to you. Likewise, you should not only have eyes for the puppies but also take a closer look at the parent animals. Healthy and agile parents are the best prerequisite for healthy, agile puppies. Don’t be afraid to ask the breeder any questions and be prepared that reputable breeders will also have some questions for you because they value their Landseer puppies only in good hands. In addition, the dogs should also have family connections with the Landseer breeder, so that the puppies are socialized accordingly.