As the name suggests, the husky originally came from northern Siberia. He was initially a companion dog for the nomads. He got his reputation as a sled dog thanks to a fur trader who took part in a sled race with what was then an even smaller version of this animal. From this successful race, the professional breeding of the Siberian Husky began. It was crossed with wolf-like dogs from this region.

With a height of 50 to 60 centimeters at the withers, the Siberian Husky is not one of the dwarfs. Females will ideally weigh between 15 and 23 kilograms and males between 20 and 28 kilograms. Crucial to the husky’s activity as a sled dog is its thick undercoat, which allows it to feel comfortable even at extremely low temperatures and not freeze. The topcoat can be darker than the undercoat. The chest and abdomen are mostly white. Further toward the back, the color becomes stronger and stronger. The color of the fur can vary between red, gray, and black. The tail, which by the way should not roll over the back, is almost free of undercoat and only has stiff stick hair. The skull of this strong and persistent dog appears pronounced, not quite pointed but not wide and yet not quite massive. The eyes can be amber, blue, or brown – but differently colored or mixed-colored eyes are also more common in the husky.

You can see the husky’s resemblance to the wolf and acoustically he sings rather than barks. Stubbornness is definitely one of their character traits, so you need consistent training with this breed. Nevertheless, this aesthetic animal is obedient and friendly. Since their origin is based on pulling sleds, the Siberian Husky tends to run rather than walk. He needs a lot of exercises and is a very good draft dog.

The topcoat of the husky is water-repellent and the undercoat has a warming effect. The bushy tail is also perfectly adapted to the icy weather, as it hides its nose underneath if it needs to be snowed in an emergency. Here the air is now filtered through the bristly coat of this smart and hardy dog.

The coat is so dense in accordance with its evolutionary insensitivity to cold and the beauty of the ice-blue eyes also changes its coat with you. In spring he sheds a lot because then the undercoat is used less than in winter. You should therefore comb or brush your hair every day. 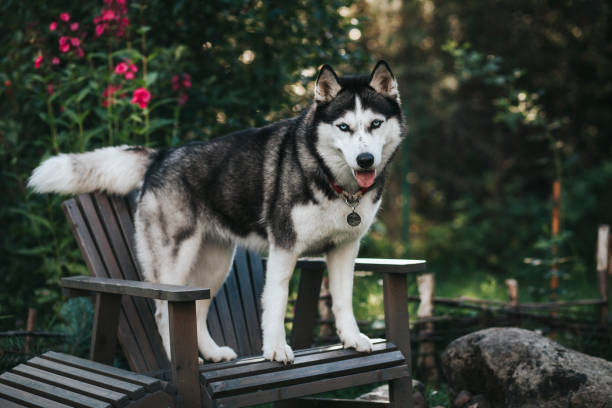 The main focus here is actually the Same. Even in adolescence, the husky often has clouding of the eye lens (cataracts, cataracts), diseases of the cornea of ​​the eye from birth (corneal dystrophy), and hereditary retinal diseases.

The husky is prone to tartar, please watch the plaque build-up as you can also reach quite quickly. Your Siberian Husky will accompany you faithfully in life for 12 to 15 years.