The Siberian Husky (Husky for short) is the dream dog par excellence for many dog lovers, mainly because of its beautiful blue eyes and its gentle, lovable nature. Keeping the working and sled dog from the far north is not as easy as it is lay people believe. But that does not detract from the enthusiasm for the husky.

When one speaks of the husky, the Siberian husky is usually meant, but there is also the Alaskan husky, which looks similar but is its own – but not recognized – breed. It originated in Alaska by crossing native Indian dogs with Siberian huskies and with hunting and greyhounds and was bred specifically for sled dog racing. Other sled dogs are also referred to as husky or huskie in the languages ​​of the Nordic nomads. The word simply means “strong, stocky or rough”. As the name suggests, the ancestors of the Siberian Husky came from far-off Siberia. It is perfectly adapted to the conditions of its cold homeland. As a draft dog and sled dog, he celebrates success worldwide. 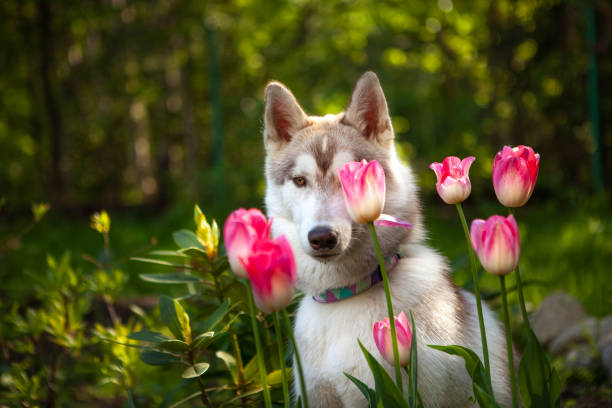 The Siberian husky has been a faithful companion of the nomads living there for many centuries, especially the Chukchi and Evenks. For them, the huskies were and are vital to their survival. They pull their sleds through the lonely expanses of the country and can pull loads of up to nine times their own weight, covering great distances and defying the most adverse weather conditions. The nomads always raised the husky puppies together with their own children in the tent, so the animals were completely related to people and loyal to their clan. On the other hand, they don’t see the adult dogs as members of the family, but simply as working dogs, kept for practical reasons rather than pleasure. The huskies that came to Europe or were born here, on the other hand, are almost exclusively family dogs with no real task. After all, dog sled teams are something very exotic in this country.

The Siberian Husky is a very independent and alert dog. He is generally very friendly with people but doesn’t really seek out their company as most dogs do. Huskies can be kept well outdoors in a pack, but keeping them alone in houses and apartments is rather unusual for this breed. Huskies are very energetic, curious, and usually in a good mood, but they don’t think too much of obedience and submissiveness.

Even if the husky was not actually born to be a family dog, he can still be a really great family dog. Here the adaptability of the dogs to their environment is proven once again. These dogs are just friendly and interested and most of them have a special love for children and are easygoing with them. They simply have no potential for aggression at all. Huskies are also absolutely loyal to the adult family members, but they only occasionally listen to given commands. If they are mostly kept outdoors, they should live in at least two pairs, even better in a larger pack. Left alone, they are unhappy and may even howl or rampage. In the house or in the apartment they want to feel close to the family all the time.

Huskies are just as friendly to strangers as they are to their families. They sniff and wave at them in an interested and friendly manner, which is why 99 percent of them are totally unsuitable as guard dogs. This breed of a dog almost never barks, more likely to howl, which is more amusing than a deterrent.

Dealing with other dogs and pets 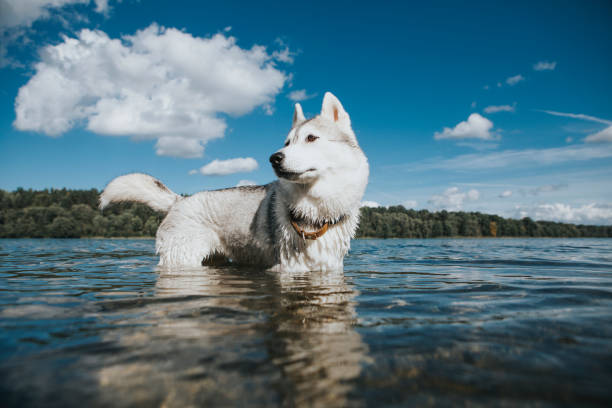 The husky is usually just as nice to fellow dogs as it is to people. With other pets, things are a bit more problematic. Because the breed has a very strong prey instinct, he might consider the cat, rabbit, or guinea pig as a “snack” if they flee from him. But if you get the husky used to his animal companions from the start, there will be fewer or no difficulties in this regard.

The husky’s urge to move is exceptionally large. After all, by nature, he spends a large part of his life running. If he can’t pull a sled, you have to use him in other ways. Two or three short walks a day are not enough for him. It is best to let him walk on his bike or at least jog with him. In order to give a husky the necessary workload, its people have to be very active and sporty. Underused animals tend to do a lot of stupid things and are very inventive. In terms of sport, all draft sports are more suitable for the husky, while he shows little interest in agility, dog dance, or obedience.

A husky’s hunting instinct is considerable. If he encounters a game, he will pursue it and is then hardly available. He can also come up with the idea of wanting to see the world alone. Therefore, many huskies cannot be let loose and are not easy to lead even on a leash. However, this is also a question of character and also a question of consistent upbringing. There are also animals of the breed that are very good at walking and obeying off a leash. It’s best to start training them early on.