English bulldogs are very attached to humans and will do anything to please their owners – although the dogs have historically been used as attack dogs and for baiting animals, and have generally not been treated very well by humans. The gentle power packs with the fierce appearance are popular companion dogs, especially in their home country and in the USA, despite frequent torture.

Contents hide
1 Angular and Powerful: the Appearance of the English Bulldog
1.1 How to Identify English Bulldogs
1.2 External characteristics according to the FCI breed standard
1.3 The typical coat color of English bulldogs: strong colors and contrasts
1.4 Other colorations approved for breeding:
2 The History of the English Bulldog: from Attack Dog to Cuddle Friend
3 Nature and Character – Lazybones Instead of Hard-Biters
3.1 A philanthropist by nature
3.2 Lethargic city dog ​​or endurance athlete?

Angular and Powerful: the Appearance of the English Bulldog

When it comes to English bulldogs, it is important to note that common perceptions of physical appearance are not consistent with healthy breeding. Although dog show judges and breeders will not consider popular traits such as blunt tails and excessive wrinkling as faults, the breed’s traits should never be so pronounced as to limit the dog’s health or agility.

How to Identify English Bulldogs

Many Great Dane dog breeds were created from crosses between English bulldogs and other breeds such as terriers. French bulldogs and Boston terriers, for example, share many similar traits, but are generally not as broad or as powerful as the English bulldog. The so-called rose ears and the typical white-brown or white-red coloring of the fur are also clear identification features.

External characteristics according to the FCI breed standard 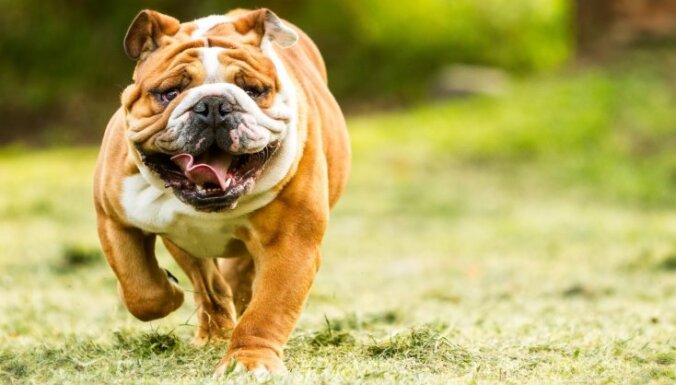 English Bulldogs’ coats are typically richly colored with large, sharply defined spots. Different coat colors exist, but black bulldogs are not desirable in the breed. In addition, merle-colored dogs are popular with owners. These dogs sport speckle-like spots and often have light blue or different colored eyes. The genetic defect makes the dogs more susceptible to UV radiation and promotes skin problems, which is why affected bulldogs are unsuitable for breeding.

Other colorations approved for breeding:

The History of the English Bulldog: from Attack Dog to Cuddle Friend

The English bulldog is the national animal of the United Kingdom and has been bred specifically as a domestic dog in England and Scotland since 1865. Their intimidating appearance goes back to their violent past: So-called chain dogs (bund dogs) were already used in the 13th century for bull baiting and for entertainment against other dogs and wild predators in dog fight arenas. It wasn’t until 1835 that bull baiting was banned and enthusiasts of the breed began selecting smaller and friendlier dogs for breeding.

Nature and Character – Lazybones Instead of Hard-Biters 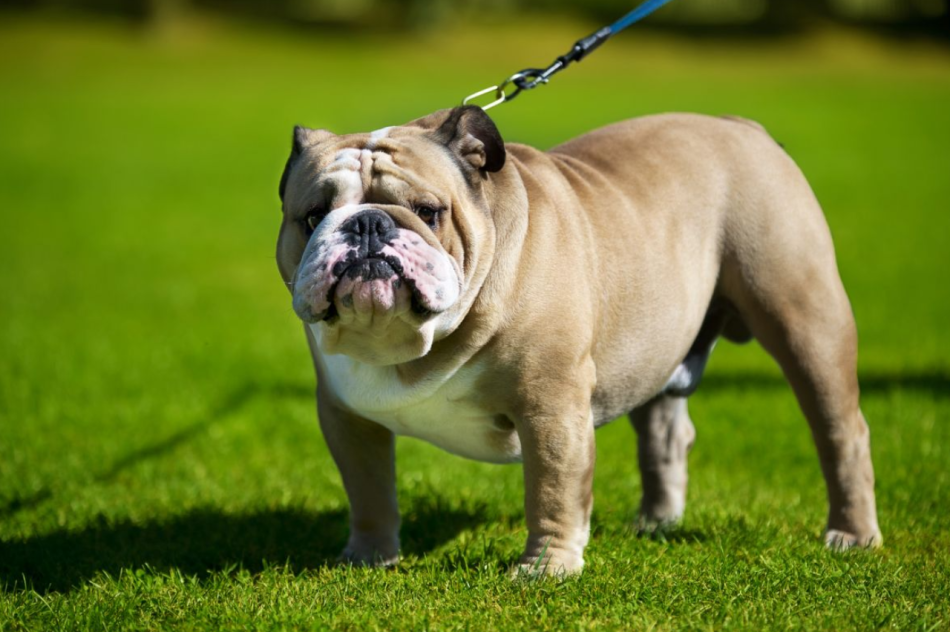 In the 19th century, English bulldogs became desirable companions for English gentlemen, and their agile and bold nature suited them to household chores. They form a close bond with their owner and with the people in their immediate vicinity. The dogs love activity and approach sporting tasks with enthusiasm, but due to physical limitations they can only endure short-term exertion in moderate temperatures.

A philanthropist by nature

Bulldogs will do almost anything to please humans, only being stubborn and defiant when they feel it is absolutely necessary. The dogs are family-friendly and show a lot of patience with children and other animals. They react reservedly to strangers at first. If the bulldogs feel safe, they openly show their affection for people and animals and constantly demand pats from everyone present.

Although English bulldogs are physically strong and can engage in sporting activities, they generally prefer the easy life and like to lounge around. Animals with respiratory problems or deformed bones tend to be lethargic – owners should counteract this with both medical and psychological measures and encourage their animals to exercise more regularly. Due to their moderate urge to exercise, the dogs are also suitable for small city apartments, provided they get enough outdoor exercise every day.